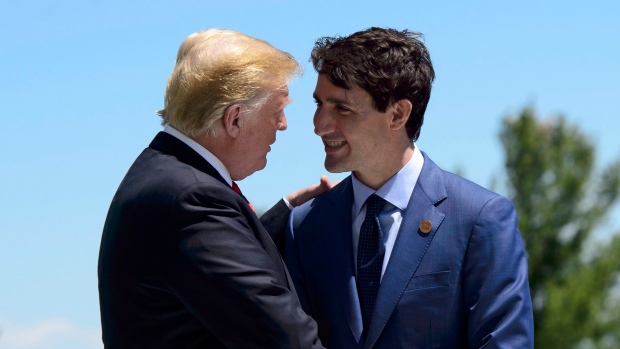 Friction between Canada and the United States quickly escalated over the weekend after U.S. President Donald Trump left the G7 summit in Charlevoix, Que. on Saturday.

Canadian Prime Minister Justin Trudeau declared in a press conference the country “will not be pushed around” by the United States, to which Trump followed up with a pair of tweets stating Trudeau is “weak” and “meek” amid the ongoing dispute on steel and aluminum tariffs.

It didn’t take long for leaders across the globe to weigh in on the tit-for-tat between the two leaders. Here’s what some of them had to say:

So.... you’re suggesting using a National Security regulation to charge $8B in tariffs to *American* consumers who buy 1 million cars made by American automakers, containing 60% American parts content, because of the price of milk in Windsor?

Where do I start? https://t.co/AxVLVEGEBn

I am 100% committed to enhancing the US-Canada relationship. I will work across party lines in both countries, with business leaders, with cultural leaders and members of the arts community & w/ residents of both countries. This relationship is just too important to put at risk

Big tough guy once he’s back on his airplane. Can’t do it in person, and knows it, which makes him feel week. So he projects these feelings onto Trudeau and then lashes out at him. You don’t need to be Freud. He’s a pathetic little man-child. https://t.co/lpz0R5Ftyj

There is a special place in heaven for @JustinTrudeau. Canada, thank you for the perfect organisation of G7!

We will stand shoulder to shoulder with the Prime Minister and the people of Canada. My number one goal is to protect jobs in Ontario, starting with my unwavering support for our steel and aluminum workers.

All Canadian leaders need to support Trudeau. Trump's outbursts, tariffs, amount to bullying. Trudeau is handling it as best anyone could.

This G7 meeting shows that united support for free trade is at serious risk.

Canada’s Conservatives continue to support the Prime Minister’s efforts to make the case for free trade. Divisive rhetoric and personal attacks from the US administration are clearly unhelpful.

To our allies: bipartisan majorities of Americans remain pro-free trade, pro-globalization & supportive of alliances based on 70 years of shared values. Americans stand with you, even if our president doesn’t.

I don’t support our Liberal Govt...but do support MY government on NAFTA negotiations!

Not hard, is it? Trump went berserk in the face of leaders who wouldn't grovel to his whims, and Kudlow is trying to cover for him with a flat-out lie about our closest ally. This may officially mark the moment when the whole administration lost its mind. https://t.co/5c6bGVdXbV