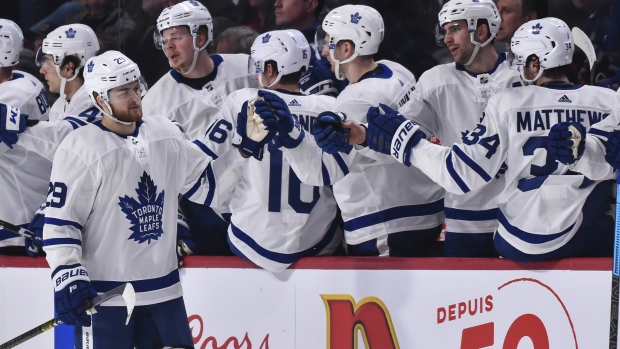 William Nylander #29 of the Toronto Maple Leafs celebrates a second period goal with teammates on the bench against the Montreal Canadiens during the NHL game at the Bell Centre on April 6, 2019 in Montreal, Quebec, Canada. , Minas Panagiotakis/Getty Images North America

It’s more likely that the Toronto Maple Leafs hockey team will end their 52-year championship drought than Canada’s banks will suffer a spike in loan losses -- as some short-sellers are claiming, according to one Bay Street analyst.

Eisman, the money manager who foresaw the collapse of the U.S. housing market, is now predicting a “20 per cent plus" decline for Canadian bank stocks as credit conditions “normalize” and loan losses jump.

"A trend that is making us believe that sector sentiment is becoming too bearish is the re-emergence of a vocal ‘short Canada’ investment crowd," analyst Gabriel Dechaine told clients in a note Wednesday, adding that certain claims have been "bold (and in some cases nonsensical).”

Dechaine says the Leafs have a better chance of winning the National Hockey League championship than for Eisman’s call to bear out. Eisman’s forecast for a “normalization” of the sector’s loan-loss ratio to 100 basis points, or 1 percent, would be well above the recent peak of 83 basis points during the financial crisis in 2009, Dechaine said.

Even in that scenario, the banks would remain profitable and could maintain dividend payout ratios, he said.