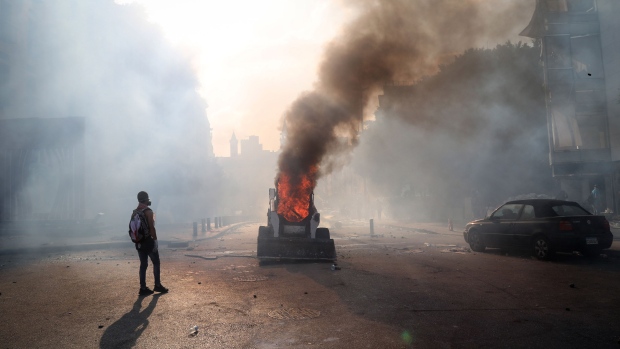 A protester stands alongside an excavator on fire during a demonstration close to parliament in Beirut, Lebanon, on Saturday, Aug. 8, 2020. Lebanese protesters took to the streets of Beirut on Saturday amid growing anger at the government following the devastating blast that killed dozens this week. , Bloomberg

(Bloomberg) -- Lebanon needs to ensure debt sustainability and a solvent financial system to be able to borrow, according to the International Monetary Fund.

“Those who benefited from past excessive returns need to share the burden of bank recapitalization, to protect the life savings of the vast majority of ordinary Lebanese depositors,” IMF Managing Director Kristalina Georgieva said in a statement on Sunday.

The IMF is seeking reforms as it negotiates billions of dollars of loans for the country. The Middle Eastern nation must also adopt safeguards to avoid further capital outflows, including putting in place legislation to formalize capital controls in the banking system.

The international lender also urged Lebanon to eliminate its multiple exchange rate system to stop further deterioration in its currency, and to curb corruption, Georgieva said.

Outrage over the deadly Aug. 4 explosion at the Port of Beirut is running high in Lebanon and beyond, with protesters demanding regime change and for the government of Prime Minister Hassan Diab to resign. The blast killed more than 150 people, injured 6,000 and destroyed large parts of the capital. It also came at a time when Lebanon is reeling from its worst financial meltdown and political crisis in decades.

U.S President Donald Trump, who joined other countries in offering support and aid to Lebanon, said he acknowledged the “legitimate calls” of protesters for transparency, reform, and accountability.

Other highlights from the IMF statement: