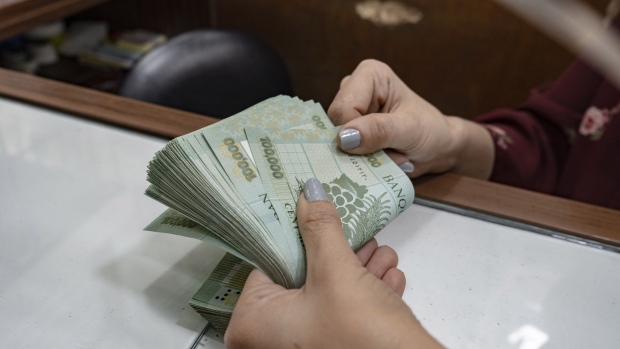 A worker counts out Lebanese pound banknotes at a currency exchange kiosk in the Burj Hammoud district of Beirut, Lebanon, on Wednesday, May 11, 2022. Top Lebanese officials conceded they’ve made little headway in meeting the conditions set as part of a preliminary agreement with the International Monetary Fund, as they made a rare outreach to bondholders more than two years after the government’s debt default. Photographer: Francesca Volpi/Bloomberg , Bloomberg

Lebanon is moving to abandon its currency peg after more than two decades, though the plan depends on approving a long-delayed recovery program.

The Lebanese pound’s official rate, which has been set at 1,507.5 per dollar since 1997, will be fixed at 15,000, the Finance Ministry said in a statement on Wednesday. The decision, effective on Nov. 1, was confirmed by the central bank.

The ministry later said, however, that the step was contingent on the approval of a financial recovery plan that Lebanon failed to adopt for more than two years since the government’s debt default.

The program, designed to end an economic collapse, marks an attempt to restructure the banking sector and the central bank’s balance sheet by recognizing billions of losses in the financial system.

The previous fixed exchange rate rate unraveled following a financial meltdown that started in 2019. The local currency now trades at about 38,800 pounds per dollar on the parallel market.

Lebanon is looking to turn the page on a crisis labeled by the World Bank as one of the worst globally since the mid-19th century. The economic meltdown pushed three-quarters of the country’s population into poverty, with the pound losing more than 90% of its market value.

In April, Lebanon reached a preliminary agreement with the International Monetary Fund on a $3 billion loan, a deal that is conditional on a series of deeply divisive reforms.

Following a staff visit to Beirut last week, the fund said that Lebanon has been “very slow” to enact the changes that have been negotiated, with most yet to be implemented.

(Updates with statements from finance ministry starting in first paragraph.)