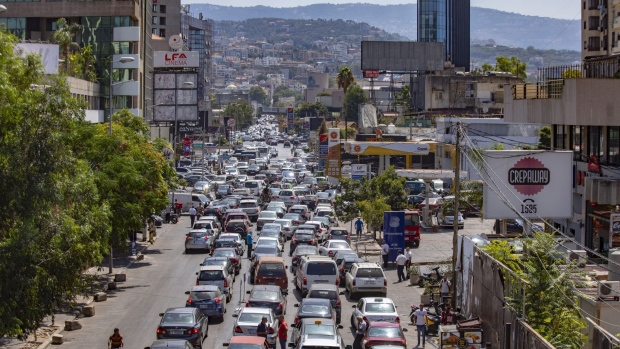 Automobiles queue at gasoline stations in the Furn el Chebbak district of Beirut, Lebanon, on Monday, Sept. 6, 2021. Egypt agreed to supply natural-gas to Lebanon through Jordan and Syria as the Arab states seek to help end power shortages in their crisis-ridden neighbor. , Bloomberg

(Bloomberg) -- International holders of Lebanese debt urged the new government to resume long-delayed efforts to restructure the country’s Eurobonds and said they were ready to work closely with authorities to find a sustainable solution.

The “Ad Hoc Lebanon Bondholder Group” comprises several large institutional holders of sovereign bonds issued by Lebanon. It was formed in March 2020 after Lebanon defaulted on $30 billion of Eurobonds.

“The Group hopes and expects the new government will promote a speedy, transparent and equitable debt restructuring process,” it said in a statement. “Such a process will need the government to engage meaningfully with the International Monetary Fund as well as Lebanon’s international creditors and official sector partners.”

International investors hold a substantial chunk of Lebanon’s Eurobonds. A deal with them is essential if the government is to eventually return to the debt market but there’s been virtually no progress in the past 18 months due to a prolonged political deadlock.

Lebanon began bailout talks with the IMF after the default and drafted a plan to restructure its entire $90 billion debt stock, which would have largely wiped out the capital of the country’s banks. The talks stalled after local lenders and the central bank, the country’s largest debt holders, campaigned for a different approach to assess and distribute the losses.

Lebanon is facing one of its biggest crises in modern history. Its currency has lost about 90% of its value in the past two years, driving hyperinflation and battering the economy, which contracted about 25% last year. Unemployment has soared as companies have closed down, prompting a wave of emigration among the country’s educated youth. Politicians have done little to halt the collapse that’s plunged more than half the population into poverty and resulted in severe power and fuel shortages.

Last week, billionaire businessman and former Premier Najib Mikati managed to form a new government after nearly 13 months of political paralysis, vowing to resume talks with both the IMF and Lebanon’s creditors. The central bank is fast running out of reserves, forcing the new government to begin reducing subsidies on fuel and pharmaceuticals.

The group of bondholders said the the aim of the government “must be to design and implement a comprehensive program of economic, fiscal and structural reforms in the interest of all stakeholders, and most importantly the long-suffering Lebanese people.”