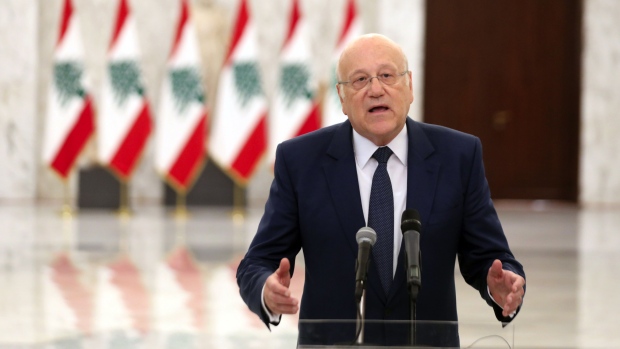 (Bloomberg) -- Lebanon’s newly appointed prime minister said he has the international backing and business experience to stop the country’s descent toward an economic and social implosion that would reverberate across the Middle East.

“I have the needed international support from the EU, and particularly from France,” Najib Mikati, a billionaire businessman and two-time former premier who was appointed this week, said in a phone interview. “And I’m confident the U.S. will be open to support as well,” he said, beyond the assistance Washington already gives to Lebanon’s army.

“I can’t put out the fire,” Mikati said Wednesday, promising to lead from the front. “But I can stop it from spreading, and that’s what I intend to do and hope to do in the first 100 days in office.”

France’s President Emmanuel Macron has spearheaded international efforts to shore up Lebanon, a former French colony, amid its worst ever financial crisis. Donors have pledged a war chest worth billions of dollars on the understanding Beirut embarks on critical economic reforms and tackles endemic corruption.

Mikati has met with the president twice since his appointment to discuss a proposed cabinet, after two predecessor premier-designates failed to install an administration. Lebanon has been run by a caretaker government since a massive explosion ripped through the port of Beirut in August last year, killing more than 200 people and damaging swaths of the capital.

The pick for the post of finance minister will have to be able to communicate with the International Monetary Fund over stalled talks on a $10 billion bailout, as well as prospective partners overseas, he said, while also dealing with the crisis-hit central bank.

But Mikati signaled he’d play a major role in financial decision-making. “I come from the world of business and finance, and I will have a say in all finance-related decisions because in this kind of crisis, you need a decision-maker,” he said.

After overseas remittances dried up, Lebanon defaulted on $30 billion in Eurobonds over a year ago to save what was left of its dwindling hard currency reserves. A collapse in the value of the pound has decimated the savings of millions of Lebanese, while shortages of fuel add to the misery.

The IMF estimates the central bank’s “embedded losses,” as well as those incurred by lenders, at around 241 trillion pounds, or $69 billion, based on a proposed exchange rate of 3,500 pounds per dollar, far below the current black-market rate of 18,000 pounds.

Mikati said he would have negotiated with creditors to reschedule and refinance debt rather than default.

“The default decision hurt the country and the banks who have their money in Eurobonds, treasury bills and deposits at the central bank,” he said. “But that’s done and we want to work on how to resolve this.”

Mikati said he was sure outside powers “know that if Lebanon descends into a full crash, it will be a bomb and a shock for the entire Middle East.”

Lebanon’s political crises have in the past led to armed conflicts that quickly turn sectarian given its fragile power-sharing system. The country is also host to more than 1 million refugees from Syria’s war.