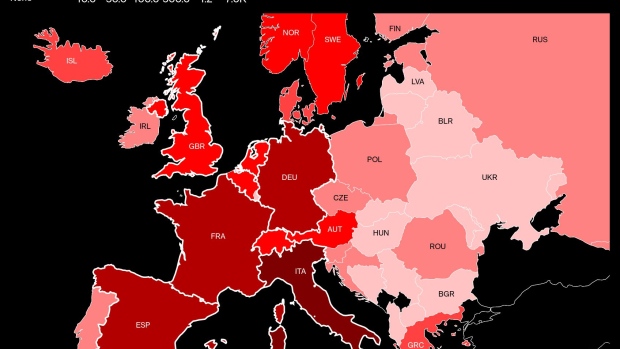 (Bloomberg) -- European leaders scrambled for a unified response to the new coronavirus as Italy became the first democratic country since World War II to announce a simultaneous quarantine and nationwide curfew.

Schools, employers and cities across the region implemented their own piecemeal lockdowns to slow the spread of the highly infectious virus. Schoolchildren in Madrid and university students in Austria and Portugal stayed home, while Dutch Prime Minister Mark Rutte called on people in the country’s hardest-hit province to work from home. Air France canceled thousands of flights, Ireland scrapped the March 17 St. Patrick’s Day celebrations and Madonna pulled out of concerts in Paris slated for Tuesday and Wednesday.

As people and businesses struggle to work with the new restrictions, European leaders will hold an emergency call on Tuesday afternoon to discuss a response to the deadly virus. On the cusp of turning into a pandemic, the virus has claimed more than 520 lives on the continent. Close to 500 of those deaths have been in Italy. Prime Minister Giuseppe Conte called this the country’s “darkest hour,” ordering Italians to “stay at home” as he explained that “we are forced to impose sacrifices.”

“This is not an easy situation to live and decisions by governments are not taken lightly,” said EU Health Commissioner Stella Kyriakides, speaking at the European Parliament in Brussels. “This cannot be business as usual; we are facing an exceptional situation.” All 27 EU nations have now reported cases, she said.

Globally, the number of those infected has surpassed 113,000, with deaths exceeding 3,900. While China, where the virus originated, is seeing the pace of new infections slowing, there are no indications its spread is in check in Europe.

That’s driving countries across the region to put more measures in place. In Spain, where confirmed cases more than doubled between Sunday and Monday, authorities closed schools and universities in Madrid and the surrounding area for two weeks starting March 11.

In Germany, Health Minister Jens Spahn pushed for gatherings of more than 1,000 people to be canceled, but left the final call on cancellations up to local health authorities. France barred gatherings of 50 or more people in clusters where infections have soared. Ireland halted the St. Patrick’s Day parades, which typically attract half a million spectators, with thousands traveling from overseas.

Still, the restrictions in Italy are by far the most stringent. After trying to lock down the northern region of Lombardy, Conte moved to widen curbs by decree to the entire nation of more than 60 million. Schools and universities will be closed nationwide, all public events will be canceled, and Italians won’t be allowed to travel without a business or health-related justification until April 3. Conte’s decision came after the number of cases in the country soared by 25% to 9,172 on Monday.

The business community appeared to rally around the prime minister on Tuesday. Marcella Panucci, director general of employers lobby Confindustria, said in an interview with Bloomberg TV that the full lockdown was justified.

“We fear a shock on credit,” she warned, calling on the government to offer guarantees and investment to shore up an economy under siege.

Companies elsewhere are taking their own measures. Deutsche Bank AG on Monday said it’s splitting investment bank teams in London and Frankfurt after an employee in its Frankfurt headquarters tested positive for the virus. The board of Banco Santander SA asked shareholders to remote into its April 2 annual meeting and make use of proxy-granting. The bank also asked employees in Madrid to work from home for 15 days.

In Italy, the impact of the lockdown won’t become clear for at least a month, Giovanni Rezza, head of the infectious diseases department at the Superior Health Institute told Corriere della Sera.

“What matters more than government measures is how individuals behave,” he said. “People haven’t realized how much they’re at risk.”

With the economy already on the brink of recession, Conte will ask parliament Wednesday for authorization to deviate from planned deficit targets to fund an economic stimulus package. The government may increase the value of the package, including more health and spending and help for businesses and families, to about 10 billion euros ($11.4 billion) from 7.5 billion euros, according to a deputy minister and two officials who asked not to be named discussing confidential deliberations.

To contact the reporters on this story: Naomi Kresge in Berlin at nkresge@bloomberg.net;John Follain in Rome at jfollain2@bloomberg.net

To contact the editors responsible for this story: Eric Pfanner at epfanner1@bloomberg.net, Vidya Root, Jerrold Colten