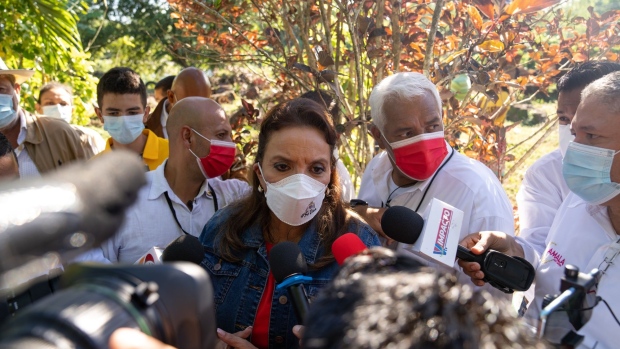 Xiomara Castro, presidential candidate of the Libertad y Refundacion (LIBRE) party, center, speaks to members of the media after casting a ballot at a polling station during the general election in Olancho, Honduras, on Sunday, Nov. 28, 2021. Castro, the wife of a former president deposed in a coup, is leading in polls as she tries to end 12 years of rule by the conservative National Party. , Bloomberg

(Bloomberg) -- Leftist opposition candidate Xiomara Castro had a wide lead in a partial vote count in the Honduran presidential election, potentially putting her on track for a landslide over the ruling party.

She had 54% support, compared to 34% for the ruling party’s Nasry Asfura, with 30% of ballots tallied, the electoral authority said late Sunday.

Castro, 62, has pledged to tax the rich, overhaul the nation’s “failed neoliberal model” and consider whether to end its alliance with Taiwan.

A Castro victory would make her the nation’s first female president and end 12 years of conservative rule by the scandal-hit National Party. Her supporters danced and waved red flags outside the headquarters of her Libre party in the capital Tegucigalpa, singing, “They’re going, they’re going, now they’re going.”

Crime, poverty and natural disasters have made Honduras one of the main sources of migration at the U.S. southern border.