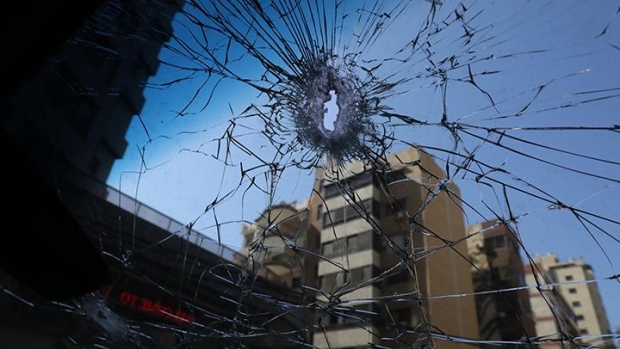 BEIRUT, LEBANON - OCTOBER 15: Damages caused by shrapnels in the area of Tayyouneh following yesterday's clashes on October 15, 2021 in Beirut, Lebanon. On October 14 protests by the Hezbollah and Amal movements against the Beirut port explosion investigation left six people dead in a Christian quarter of the Lebanese capital, where civil war had sparked in 1975. (Photo by Marwan Tahtah/Getty Images) , Photographer: Marwan Tahtah/Getty Images Europe

(Bloomberg) -- Lebanon’s deadliest outbreak of sectarian violence in years threatens to derail the new government’s talks with the International Monetary Fund and foreign creditors before they’ve even begun.

Formed five weeks ago following 18 months of political paralysis, the government’s priority was to end one of the most severe financial crises in modern history. But last week’s gunbattle in Beirut left seven people dead, prompting talk of civil war and diverting attention away from economic reforms.

At stake is the future of a population already struggling with hyperinflation, medicine shortages and chronic blackouts --  and the fate of $32 billion in Eurobonds on which the government’s defaulted since March 2020.

While the overall size of the debt is smaller than other recent sovereign defaults, such as Argentina’s or Venezuela’s, the speed of the collapse and lack of official efforts to stop it makes the situation unique.

The crisis was decades in the making. To keep the Lebanese pound strong and imports cheap, Lebanon relied on millions of citizens abroad to send hard currency remittances through local banks. For more than 20 years, the approach worked, but as the government kept overspending and the debt pile grew, foreign donors that supported Lebanon through earlier difficulties turned away.

Starting in 2016, the Banque Du Liban, or Bdl, conducted a series of so-called financial engineering operations to keep inflows coming and boost reserves. Via increasingly complex swaps, it essentially offered high returns on new dollar deposits made by banks at BdL. The IMF estimates the operations attracted over $24 billion from lenders through February 2019. Commercial banks scooped up the money by offering savers soaring yields, ensnaring retirees and salaried workers in an increasingly-risky scheme critics have since compared to a Ponzi.

The central bank warned the measures were intended to be temporary, to get the country through a succession of political crises. The international community urged Lebanon to curb rampant corruption, balance the budget and restructure a bloated public sector to unlock billions of dollars in aid.

Even as inflows began to dry up in 2019, the government failed to act. Nationwide protests erupted in October that year, demanding the removal of a political class that had bled state coffers dry. The banks closed and when they reopened 10 days later, depositors could no longer transfer their money abroad and were only able to withdraw small amounts of dollars. The banking system was in crisis.

The dollar shortage pushed people onto a black market where the pound ultimately lost more than 90% of its value, triggering hyperinflation, decimating savings and salaries and pushing three-quarters of the population below the poverty line.

With foreign exchange reserves no longer being replenished, the government announced in March 2020 that it would default, for the first time in its history, on $32 billion of Eurobonds, to save money for food and fuel imports.

2. Hasn’t it Tried to Restructure its Debts Before?

Yes it has. Then Prime Minister Hassan Diab promised, when he announced the default, that the government would work with creditors to restructure the debt and would also draft a comprehensive economic overhaul plan.

Lebanon had already hired Lazard as its financial adviser in February 2020. It quickly came up with a recovery plan that the government presented to the IMF as the basis of negotiations for a $10 billion bailout. The document estimated the central bank’s “embedded losses” and those incurred by other lenders at around 241 trillion pounds, or $69 billion at a proposed new exchange rate of 3,900 pounds per dollar. The currency has been fixed at 1,507.5 to the dollar since 1997 and the peg technically remains in place, though other semi-official bank and import rates have since been introduced as the crisis has deepened.

The plan also proposed restructuring the balance sheets not only of the central bank but all banks in a process that would have forced most to merge or close.

The central bank, and the banking sector, which together hold more than 60% of the defaulted bonds, opposed the plan. The lenders proposed instead that the government sell or otherwise monetize state assets and put the money into a “defeasance fund” used to settle its debt to the central bank.

Meanwhile, Bdl Governor Riad Salameh argued that there was no loss on the central bank’s balance sheet since longer-term dues could be amortized by printing money. Bickering among the Lebanese stakeholders undermined negotiations with the IMF that would have also unlocked billions of dollars in aid from other donors. The talks soon stalled and the central bank set about printing money, accelerating a depreciation that’s inflated away the local-currency segment of the government’s debt at the expense of soaring prices for the public.

Adding to the mayhem was the arrival of Covid-19, which choked an already struggling economy, resulting in mass unemployment in the absence of monetary or fiscal stimulus. Then, on Aug. 4, 2020, an explosion at the port of Beirut killed more than 200 and devastated swathes of the capital. The government resigned soon after.

It depends on politics. After 18 months of deadlock, a new government headed by Prime Minister Najib Mikati, a billionaire telecoms tycoon, started work in September, promising a recovery plan.

The cabinet announced in early October it had resumed talks with the IMF. In a sign it’s serious, it also agreed that Alvarez & Marsal conduct a forensic audit of central bank accounts.

The new government also promised to negotiate with foreign creditors to restructure its Eurobonds. International investors including BlackRock Inc., Ashmore Group Plc and Fidelity formed an ad hoc group of bondholders after the default, advised by lawfirm White & Case, but, without a fully-fledged government in place for so long, no serious talks took place.

A sovereign debt restructuring typically involves a haircut on the debt’s nominal value and an extension of maturities, in hopes that the economy will recover and the government will eventually be able to pay or refinance.

Sovereign bonds sometimes include a collective action clause that allows a majority of noteholders to agree a restructuring and force detractors to accept. Since 2014, the threshold has been 66%, but Lebanon’s notes pre-date the change and have a higher threshold of 75%, potentially complicating negotiations.

Lebanon’s collective action clause is also per series, meaning for the government to restructure one bond series it would need the approval of 75% of bondholders and each bond must be negotiated alone. Local banks initially held some $11 billion of the debt, though they have already begun provisioning ahead of an expected haircut. The central bank holds about $5 billion of the paper but would be excluded from any talks.

The government is working against the clock, however. With legislative elections set for March, it now has five months to resolve these complex issues before another spell of horse-trading over the next government.

Meanwhile, last week’s clashes have focused attention on a campaign by Iranian-backed Hezbollah to remove the judge investigating the port explosion. The standoff could lead to protracted political turbulence, even triggering further violence, and detract from economic reforms that’ll require buy-in from key political players.

4. Why is Lebanon’s restructuring so complex?

In Lebanon’s case, the government needs to restructure its debt pile, which includes $32 billion in international bonds and what amounts to $58 billion in local currency notes at the official exchange rate (now worth a fraction of that on the black market.) It must also overhaul its entire banking system, devalue or liberalize its exchange rate, and find a way to manage both its fiscal budget and trade balance in a more sustainable way.

All of those issues are tangled up in its complex political system. One of the most contentious issues is the electricity sector. Before the crisis, Lebanon was able to cover just under 60% of its power needs, with subsidies, failure to collect bills and entrenched corruption resulting in some $2 billion of annual losses.

As dollar supplies have dwindled, the state can no longer afford enough fuel for the power stations, resulting in longer blackouts. Authorities recently agreed with Jordan, Egypt and Syria to import natural gas through an existing pipeline to one of the country’s pipelines but have yet to secure funding.

The fiscal deficit has shrunk since the default but any government will struggle to cut public sector jobs and improve tax collection with poverty levels soaring. The dollar crisis has reduced the import bill, but the government has done little to encourage dollar-earning exports.

And many of the country’s powerful politicians are also shareholders of banks, giving them vested interests in opposing a recovery plan that forces lenders and their owners to bear the brunt of the crisis. If recent months are any indication, they’ve already judged that they can get away with passing the burden onto the public.