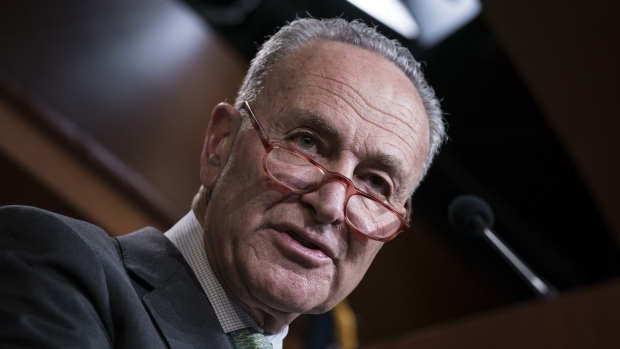 Senate Minority Leader Chuck Schumer, a Democrat from New York, speaks during a news conference at the U.S. Capitol in Washington, D.C., U.S., on Tuesday, March 17, 2020. The Senate will move forward with a vote on the coronavirus-relief bill passed by the House instead of seeking to add major fiscal stimulus, Majority Leader Mitch McConnell told reporters today. , Bloomberg

The head of one of the U.S.’s biggest marijuana companies said the draft legislation that could legalize cannabis in the country would allow American pot firms to access crucial financial services and to easily obtain much-needed capital.

Charlie Bachtell, chief executive officer of Cresco Labs LLC, told BNN Bloomberg he expects that "Big B"-type of banking services, including access to more capital and debt, would finally be available for companies if cannabis gets legalized in the U.S.

Earlier this month, Senate Majority Leader Chuck Schumer and two other Democratic senators released a broad-ranging cannabis reform draft bill that would de-schedule marijuana as a controlled substance, permitting federally regulated banks to engage with U.S.-based businesses in the sector. However, Schumer admitted that he doesn't have enough support in the Senate to pass the bill in its current form, and plans to unveil a final draft later this fall.

"When people talk about banking, we hear often [that companies] have figured out how to work with depository institutions and they will hold your funds, but that's more like operational accounts. That's not ‘Big B banking’" Bachtell told BNN Bloomberg in a broadcast interview.

The U.S. Financial Crimes Enforcement Network, which tracks how many financial institutions have engaged with cannabis companies, said in a recent update that there were 510 banks and 174 credit unions that worked with marijuana companies in the second quarter of this year. That's down from a peak for 747 banks and credit unions in the fourth quarter of 2019.

De-scheduling cannabis would lead to a wave of institutional investor interest into the U.S. cannabis market, Bachtell noted. A recent report from Jefferies LLC found that institutional investment accounts for just four per cent of U.S. publicly-listed cannabis company shares compared to 15 per cent for the Canadian cannabis space.

"We've heard names over the past couple of months that have actually been able to take positions in the U.S. cannabis [industry]," Bachtell said.

"I can tell you, for the most part, your traditional institutional investor is absolutely intrigued and is finding out and learning as much as they can about the U.S. [cannabis] operators today, waiting for the opportunity to deploy that capital into this industry."