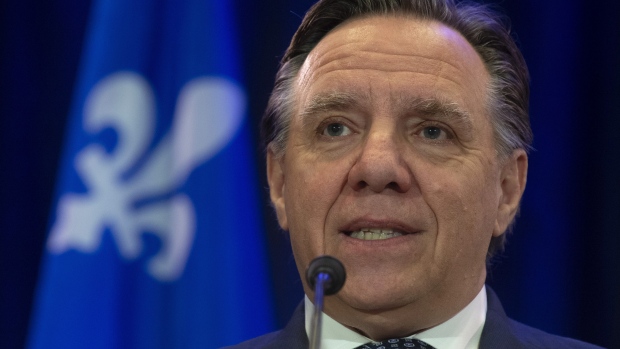 QUEBEC - Premier Francois Legault is open to the creation of a Quebec version of Amazon, which his economy minister described Wednesday as a way to serve nationalist customers.

Legault and Pierre Fitzgibbon spoke Wednesday about an “Amazon Quebec” ahead of a meeting with representatives of the online giant's Canadian division.

The premier told reporters he is concerned about the lack of Quebec-made products available on Amazon and wants to make sure the company isn't just selling American products to Quebecers.

The idea of a Quebec-focused platform was first floated in 2017 by businessman Alexandre Taillefer, who later became campaign director for the Quebec Liberal Party.

Fitzgibbon went further then the premier, saying the province could “absolutely” invest in a Quebec platform, as long as it was sustainable.

Any such platform, he added, would also have to a include a homegrown delivery mechanism to ensure goods reach their destinations quickly.

“We have products, we have nationalist clients who like to buy in Quebec, so maybe it's time to look more closely at having a structure,” he said, adding that he was a big believer in Amazon's model.

Fitzgibbon said Quebec has the capacity to deliver groundbreaking solutions. “I keep hammering on how we need to innovate,” he said.

Legault, for his part, said his priority is finding a way to reassure Quebec suppliers.