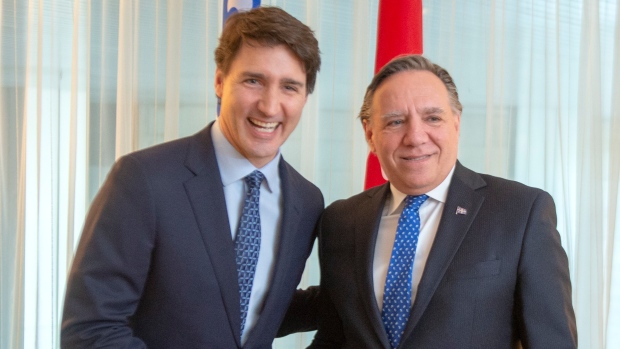 Blanchet has threatened to vote against implementing the deal over concerns about damage to Quebec's aluminum industry, but Legault said the agreement contains important gains for the aluminum sector.

"I'm asking Yves-Francois Blanchet, for the Bloc to support the deal, to not delay the work -- to not filibuster it -- so that it's adopted quickly," Legault said following a meeting with Prime Minister Justin Trudeau in Montreal.

The new United States-Mexico-Canada Agreement saw Mexico agree to a tighter definition on what constitutes North American steel but not aluminum, an exclusion that union and industry officials argue could allow the country to become a back door for aluminum from China.

"Unfortunately we know very well that Mexico is importing aluminum from China and doesn't respect this target of 70 per cent," Legault said.

The tweaked requirements, announced this week, state that 70 per cent of steel and aluminum used in auto manufacturing must be purchased in North America -- but only the steel has to be produced in North America.

The premier said he would continue to negotiate with the U.S. and Mexico on aluminum but that Quebec's $20-billion trade surplus with the U.S. means that "it's in Quebecers' interest that this agreement be ratified."

"The Bloc Quebecois works exclusively in the interest of Quebecers, of all Quebecers, from all regions," he said. "We demand that our aluminum workers have the right to the same protection as steel workers, even if it means renegotiating."

Trudeau said as he entered the meeting he hoped to move forward with Quebec on the trade deal, but he did not field questions afterwards.

Legault said he had some advice for the prime minister on another matter, asking Trudeau to stay out of the contentious debate over the province's secularism law.

The law prohibiting some public-sector employees from wearing religious symbols, known as Bill 21, is supported by a majority of Quebecers and Trudeau should respect their wishes, Legault said.

"I can understand that he's against Bill 21, but I'm asking him to respect a decision that has been taken by a majority of Quebecers, by a nation," he said.

"We won yesterday," he added, referring to a Quebec Court of Appeal ruling that rejected a request to suspend Bill 21's central elements.

Though the law was not suspended, all three judges acknowledged the law, adopted in June, is causing harm that may be serious and irreparable to some of those affected.