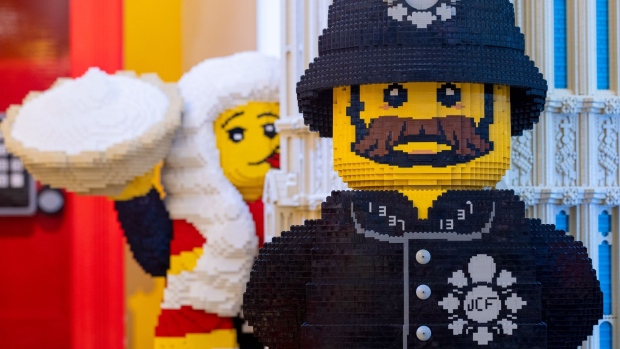 A figure of a British policeman built from Lego bricks at the Lego A/S store in London, U.K., on Monday, March 7, 2022. The Lego Group will report their annual results on Tuesday. , Bloomberg

(Bloomberg) -- Lego Group signaled it will not push up the prices of its colorful building-block sets ahead of Christmas despite soaring inflation in many of its key markets.

The world’s largest toymaker said strong sales and a supportive family owner mean it can often absorb higher prices without passing them onto customers.

“We have moved slower than others when it comes to price increases,” Chief Executive Officer Niels B. Christiansen said by phone. “We want our products to be available and we have the luxury of not being purely commercial in our approach. We’re privately owned, so it’s not about the performance in one quarter, we want to do what’s best for us long-term.”

The decision by the Danish toymaker will pile further pressure on rivals Hasbro Inc. and Mattel Inc. ahead of the vital festive period, as they all face higher prices for energy, plastic materials and freight amid globally accelerating inflation.

Lego’s strong sales and “top line momentum” mean it’s better able to weather periods of higher costs, Christiansen said. “We’re trying to counter the higher prices by being more productive, but primarily we’ve been able to counter inflation by growing our topline very fast,” he said in an interview.

“Toy manufacturers Hasbro and Mattel are raising prices again this year to help combat rising costs, and their customers, which are mostly retailers, can follow suit and attempt to pass on higher prices to consumers given that toys are typically recession resilient and among the last categories to be cut. Also, low starting price points for many toys make price increases easier to pass through.”

Lego, which is owned by the billionaire Kirk Kristiansen family, has grown its sales about seven-fold over the past 15 years. On Wednesday it reported 17% revenue expansion in the first six months of the year and said it won significant global market share. Meanwhile, expenses jumped 26% in the period, though part of that was related to investments in new stores and more factories to capture future growth. Profit was largely flat, year-on-year, at 6.15 billion kroner ($800 million).

Lego is hoping that consumers, squeezed by a higher cost of living, turn to “high quality products with a long life cycle” rather than toys that “may only grab children’s attention for two weeks or so,” the CEO said.

“There will be more pressure on households this Christmas, but it remains to be seen if it will affect presents or if consumers scale down on things like cars or travel,” he said.