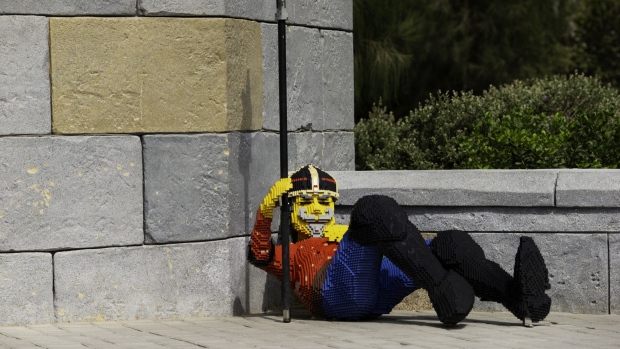 A reclining model guard, made out of Lego bricks, stands on display at the Legoland Dubai theme park, operated by DXB Entertainments PJSC, in Dubai, United Arab Emirates, May 2, 2018

The architects working on Lego’s new campus in western Denmark are designing a structure that the chief executive officer says he hopes will make waves as far afield as Singapore.

Lego’s 54,000-square meters (13.34-acre) new grounds will host 2,000 employees when completed in 2021. According to Niels Christiansen, the CEO, it will help the company compete with the likes of Apple or Nike for digital, analytic and creative professionals.

“People will get back to London or Singapore and talk about it,” Christiansen said.

From its base in Billund, one of the world’s most successful toymakers is designing Googleplex-style headquarters that offer play areas, collaborative work spaces, gyms and cafes. But it’s more than just a trendy design project. The goal of making international talent feel welcome comes as increasingly strict Danish immigration policies dissuade skilled workers from heading to the country.

Successive Danish governments have introduced tight restrictions on immigration. That’s led businesses to complain about a lack of the kinds of qualifications they need to get ahead. According to the latest survey from InterNations, an expat network, Denmark is the second-hardest country in which to settle in, after Kuwait.

Though the Lego CEO didn’t discuss Danish immigration policy, he said that creating a hospitable environment is important. “A building like this does a lot for the retention” of talent and for allowing “really creative people to grow,” Christiansen said in a phone interview on Monday, after completing the first phase of the project. People from more than 50 nationalities currently work for Lego in Billund.

Visitors to the campus are greeted by huge yellow bricks perched haphazardly on the roof of the structure and familiar mesh patterns on its walls.

Christiansen said the expectation is that the design will lead to real productivity gains. But he also noted the building’s unusual look.

“It’s a building that a child would have built,” he said.