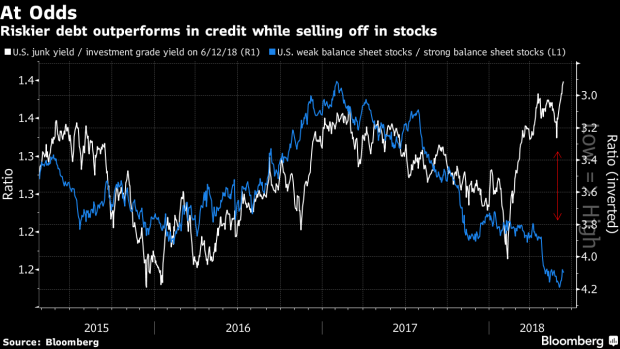 (Bloomberg) -- Equity and debt investors are placing opposing bets on Corporate America’s financial health. The rift is unlikely to last.

"Equity investors are generally preferring strong balance-sheet stocks, because this is where the earnings growth is, such as technology shares," said Stephen Caprio, credit strategist at UBS Group AG. "But credit investors are primarily interested in yield and default risk.”

S&P 500 stocks with strong balance sheets gained 9.4 percent this year, compared with 2.7 percent for companies with the weakest financial ratios, according to baskets compiled by Goldman Sachs Group Inc.

The former outperformed their riskier cohorts for five consecutive months through May, the longest streak since 2011. Another case in point: A concentrated portfolio that bets on U.S. companies with the most leverage has tumbled to 2009-era levels, according to a market-neutral Bloomberg index.

Those numbers are grounded at the grass-roots level. In a survey of global fund managers conducted by Bank of America Corp. this week, a record net 34 percent of equity investors say companies are over-leveraged, more than in the throes of the 2008-09 crisis. The poll surveyed those with $541 billion in total.

Credit investors appear to be living on another planet. With defaults still low, they are chasing yield and gravitating to short-duration corporate bonds -- including some of the riskiest junk debt. Bonds in the CCC ratings category and below have returned 4.3 percent this year, according to Bank of America index data, while the debt of investment-grade companies posts a 3.3 percent loss.

The ratio between U.S. junk-bond yields and their high-grade counterparts has reached levels that recall the pre-crisis bubble and the 1997 heyday before the Asia crisis.

Underscoring bullish sentiment, even as the U.S. business cycle shows late-cycle angst, traders are demanding the slimmest premium to own junk notes over high grade in about a decade.

The outperformance is starker considering the subdued earnings growth of high-yield companies, according to UBS research. "Even if earnings growth is poor, credit investors may still buy CCC names if they believe default risk is low and liquidity is high to allow these names to refinance," said Caprio.

The equity-credit divergence “confirms investors remain in a barbell of ‘uber growth’ in equities and ‘uber yield’ in credit, which has been the dominant themes during the QE-era,” said Tommy Ricketts, investment strategist at Bank of America. “That trade is getting narrower and narrower now though.”

Technicals are playing their part too. A "meaningful" drop in net issuance of high-yield bonds at a negative $24 billion so far this year has offset $15 billion of outflows from the asset class, juicing bond prices in the process, according to a Goldman Sachs report on Friday.

"The most recent leg of IG/HY compression in credit has been exacerbated by supply technicals, as opposed to improving fundamentals in lower-quality credits," strategists led by Lotfi Karoui wrote.

That’s not to say all credit investors are failing to separate the wheat from the chaff, as the proportion of global highly leveraged companies creeps above 2007 levels. High-grade investors, at least, are showing distaste for companies with lower ratings.

In junk, something may have to give soon enough. Goldman Sachs projects U.S. junk spreads will widen to 370 basis points by year-end compared with 338 basis points currently as new supply weighs on prices.

Another reason to be bearish: At this point of the business cycle, the rewards of growth in cash flows are increasingly going to shareholders rather than creditors via share buybacks and mergers and acquisition activity, according to Caprio.

"At some point, you do hit an inflection of course, where the earnings growth becomes so weak that credit fundamentals are challenged,” he said. “We’re not there yet."

--With assistance from Dani Burger and Gowri Gurumurthy.

To contact the reporter on this story: Sid Verma in London at sverma100@bloomberg.net

To contact the editors responsible for this story: Samuel Potter at spotter33@bloomberg.net, Cecile Gutscher, Natasha Doff