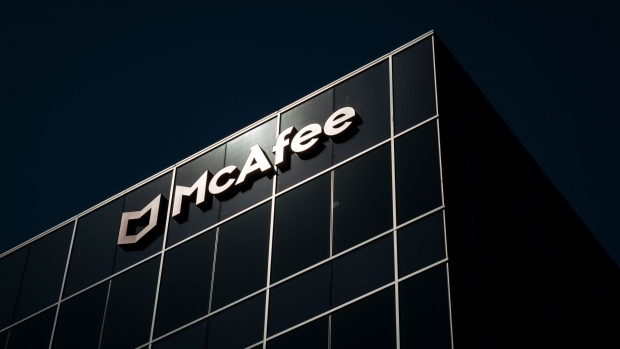 Signage is displayed outside McAfee Corp. headquarters in Santa Clara, California, U.S., on Tuesday, Sept. 29, 2020. Cybersecurity software maker McAfee Corp. has filed to go public, adding to the roster of companies rushing to cash in on a hot market for U.S. initial public offerings. , Bloomberg

(Bloomberg) -- The ability of Wall Street bankers to compartmentalize is on display in the leveraged buyout market, where two deals totaling $18 billion in loans and junk bonds so far remain unbothered by anxiety over rising interest rates.

McAfee Corp. is selling $5.7 billion of leveraged loans and is expected to soon launch another $3.3 billion of bonds as part of its sale to investors including Advent International Corp. and Permira Advisers. Athenahealth is raising $9.3 billion of loans and bonds, which will help fund its buyout to a group led by Hellman & Friedman LLC and Bain Capital.

Demand for the transactions highlights the difference in investors’ attitude toward most leveraged credit right now, compared to the growing worry and volatility in equities and other risk markets that coming rate increases from the Federal Reserve will hurt asset values. There are eight junk bond deals in the works this week, while more than 30 leveraged loans are currently marketing.

“Active high-yield managers have cash to invest and the new issue calendar has been slow out of the gates,” said Bill Zox, a high-yield bond portfolio manager at Brandywine Global Investment Management. “Leverage is high on these LBOs but the equity contributions are also high and these are good businesses.”

Cybersecurity software maker McAfee is marketing its deal at 7.8 times leverage, a key measure of total debt to earnings. It’s the latest buyout with relatively high leverage after private equity firms loaded more debt onto their acquisition targets than ever before in 2021, hitting an average of 6 times and surpassing their pre-pandemic record.

The LBO of Athenahealth, a health information technology company, is at a similar level of 7.6 times total leverage, based on full-year 2021 earnings, according to people familiar with the matter who asked not to be named discussing a private transaction. The bond was launched in the low-6% yield range, different people with knowledge of the deal said.

Representatives for Goldman Sachs Group Inc., which is lead manager of the bond sale, JPMorgan Chase & Co, which is leading the loan, Athenahealth, Hellman & Friedman and Bain declined to comment.

Leveraged loans, which are floating rate, are seeing high demand as protection against the anticipated rate increases. Meanwhile U.S. junk bonds on Monday had their third straight session of declines, posting losses of 0.29% as the asset class is more sensitive to rate and equity volatility. Yields jumped 11 basis points to close at a 15-month high of 4.94% at the end of Monday, though the cost of borrowing is still historically low.

“We have been telling investors that 5% yield to worst for high yield was the level we thought was much more attractive,” Winifred Cisar, global head of credit strategy at Creditsights Inc., told Bloomberg TV’s Surveillance on Tuesday. “Given the amount of cash still on the sidelines and the need to generate some income in this inflationary environment, 5% on high yield doesn’t look too shabby.”

That’s paved the way for several large technology leveraged buyouts to try and wrap up deals before more news could shock markets.

“Typically those deals are late cycle when everything is on the table -- no real creditor protections, funding costs tight, etc., which would be consistent with where the market was when these deals were agreed to,” said Noel Hebert, director of credit research at Bloomberg Intelligence. “Now rates are pushing higher, and you might have to put in some concessions or flip some of your deal into loans where the market is still in better shape, but depending on your bogey, you probably had some room in funding cost assumptions.”

Meanwhile the buyout pipeline keeps building. Brookfield Business Partners LP launched a new two-part $2.5 billion loan sale to help fund its buyout of Scientific Games Corp.’s global lottery services and technology business. And banks are preparing $14 billion of bonds and loans for a buyout of software-maker Citrix Systems Inc., in what would be one of the largest private equity deals in over a decade.

Credit market weakness continued into Tuesday amid a broader equity rout as the Fed kicks off its latest meeting.

Six borrowers priced bonds in Europe on Tuesday, to raise at least 5.2 billion euros ($5.9 billion). They include France, which is marketing an inflation-linked note.

Issuers stayed on the sidelines on Tuesday ahead of a U.S. Federal Reserve decision later this week.