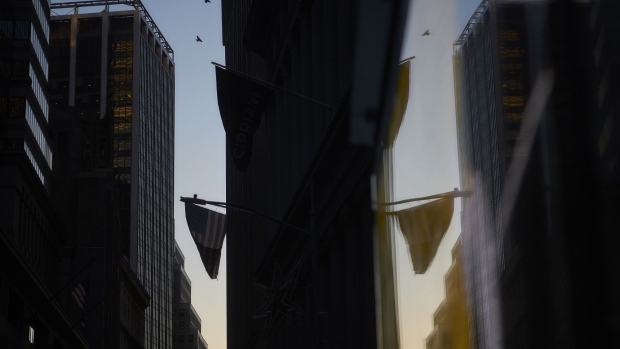 An American flag is reflected in the window of a building near the New York Stock Exchange (NYSE) in New York, U.S., on Thursday, Dec. 27, 2018. Volatility returned to U.S. markets, with stocks tumbling back toward a bear market after the biggest rally in nearly a decade evaporates. Photographer: John Taggart/Bloomberg , Bloomberg

(Bloomberg) -- A handful of companies have side-stepped a grey area that would have allowed them to use Libor on U.S. leveraged loan sales, another sign that the $1.3 trillion market is embracing the new regulator-approved Secured Overnight Financing benchmark.

American Trailer World Corp., which makes parts for vehicles, and technology company Symplr Software Inc., have switched existing loans to SOFR as they look to tack on more debt to those deals. Cloud-based provider Alight also amended about $523 million of outstanding loans to SOFR from Libor.

Libor was scheduled to be discontinued for new loans starting in 2022, but a few grey areas, including for deals where extra debt is added onto existing loans -- like in some of these cases -- saw a few Libor loans crop up in January. The fact that borrowers have opted for SOFR anyway shows the benchmark is gaining favor.

KKR & Co. switched to SOFR from Libor in the middle of marketing a buyout financing on behalf of Trilantic North America last week.

In the latest three cases, the spread that borrowers are paying above the benchmark -- whether Libor or SOFR -- remains the same. And the swap makes sense since SOFR is currently lower than Libor, which means the cost of borrowing is cheaper.

Blazing demand for leveraged loans, meanwhile, is allowing companies to reduce borrowing costs by tinkering with a provision many viewed as key to weaning the industry off Libor.

Several SOFR-based loans have now skipped a “credit spread adjustment” intended to tack on a few basis points to the deal’s interest rate to compensate for a lack of credit-market sensitivity that tends to keep it below Libor.