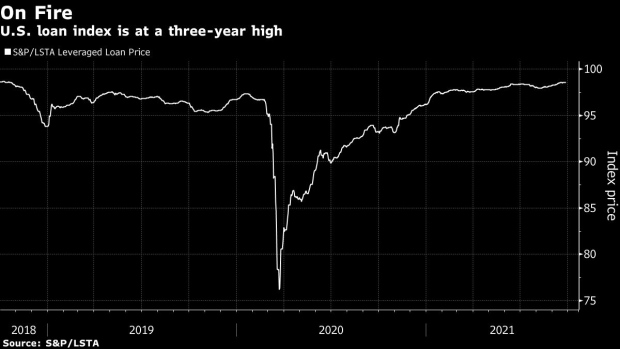 (Bloomberg) -- Ultra low interest rates globally have sparked a new credit cycle for the leveraged loan market with little expected to bog it down any time soon.

That’s the sentiment of some of the biggest names in the $1.2 trillion market who spoke at a Bloomberg News leveraged loan conference on Tuesday. While risk-off sentiment could create some volatility in the short-term and default rates will eventually rise, fundamentals are expected to be strong for the foreseeable future with significant distress a long way off, they said.

“This is as robust a market as we’ve seen,” said Mark Attanasio, co-founder of Crescent Capital Group. “And we actually think that all makes sense given where yields are right now.”

“It really feels like this is the beginning of a new credit cycle,” Lauren Basmadjian, co-head of liquid credit at Carlyle Group Inc. said during the event.

Roberta Goss, co-head of the bank loan and CLO platform at asset manager Pretium Partners, said it will be hard to maintain such a low default rate, but “for the foreseeable future, over the next 12 to 18 months, credit markets” are going to continue to be very attractive.

Still, the leveraged loan market as well as the $1.7 trillion high-yield bond market will increasingly need to factor in global concerns.

“The market has gone from sorta being niche in the United States to a global market,” Attanasio said. That requires investors to take inputs from everything that’s taking place around the world -- from property companies in China to geopolitical issues in the Middle East -- and factor that into a high-yield bond to a syndicated loan to making an unitranche investment, he added.

But one area that’s not a concern is the Evergrande debt debacle unfurling in China.

“At the moment -- and I’ll say at the moment because these black swan events tend to catch you by surprise -- it seems like it will be more a challenge for the financial system in China,” Attanasio said.

Attanasio also doesn’t know of any peers who own those bonds.

Cade Thompson, a partner in the capital markets group at KKR & Co, said his firm is looking to take advantage of favorable market conditions to refinance debt of some of the firm’s portfolio companies that were most heavily impacted by Covid.

“We’ve been really in a tear since the Fed intervened in the markets,” KKR’s Thompson said. “It’s hard to understand what’s going to knock us off that.”

Europe saw a busy session with 11 issuers selling 11 tranches for an equivalent of about 7.3 billion euros.

A few borrowers ventured back into Asia’s primary market with mandates for new dollar bonds, after a plunge in issuance amid concerns about China Evergrande Group.