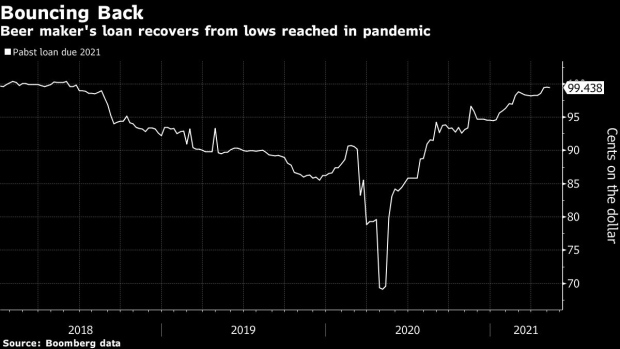 Blue Ribbon LLC, the maker of the iconic 177-year-old lager, hiked pricing and strengthened investor protections on its $378 million 7-year loan offering Tuesday, an indication that investors weren’t enticed by the original terms.

Pabst Blue Ribbon has long had a reputation as a blue-collar beer better known for its low price than its taste. But the brand experienced a revival this millennium, catching on with the hipster set as a more-authentic cheap-beer option than brands like Bud Light. The renaissance didn’t last, however, as craft beers, hard seltzers and other drinks crowded in the marketplace. It also doesn’t help that the pandemic has forced temporary closures of bars, restaurants and sports venues.

Moody’s Investors Service upgraded Blue Ribbon to B2 from Caa1 after the loan sale was announced in April, writing that Blue Ribbon will have better liquidity following the refinancing. But falling sales from its most important brand have been hurting the company.

“The rating is constrained by the company’s small scale compared with much larger brewing peers, and its heavy reliance on its largest brand, Pabst Blue Ribbon, which accounts for nearly half of sales and has seen consistent revenue and volume declines,” Moody’s analyst Linda Montag wrote.

Companies have rarely had trouble tapping the leveraged loan market this year, which has seen robust demand from investors who want to bet on a reopening economy and use the floating-rate debt to protect against rising Treasury yields.

Re-commitments for the loan were due at 2 p.m. in New York, after the company didn’t receive enough orders from investors by the original April 29 deadline. JPMorgan Chase & Co. is leading the sale of the debt, which will refinance Blue Ribbon’s existing term loan that matures this year.

The current pricing offer is significantly wide of the 4 percentage point margin Blue Ribbon’s 2021 term loan pays. The new terms also include call protections for investors that are rarely seen with loans.

JPMorgan declined to comment on the sale and Blue Ribbon didn’t immediately respond to a request for comment.