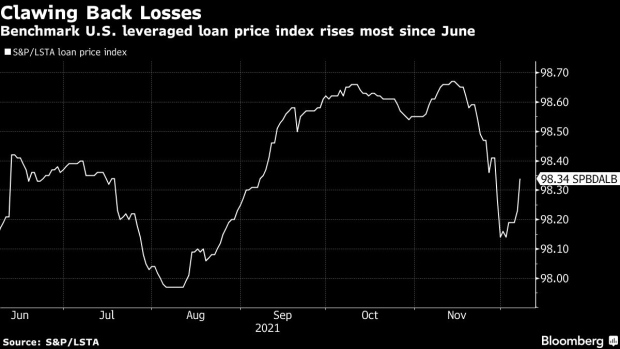 (Bloomberg) -- It sounds scary: three leveraged loan deals just got yanked in the U.S., the biggest hiccup since things went haywire early in the pandemic.

Yet it doesn’t appear to be a harbinger of major trouble and the withdrawals don’t seem to reflect broad market weakness.

No month has seen that many deals postponed since March 2020, when 10 transactions valued at $14.3 billion were canceled, according to data compiled by Bloomberg. But December 2021 pales in comparison so far, with just $1.46 billion pulled.

Other companies, meanwhile, are capitalizing on still-robust demand as the leveraged loan market continues to largely hum along even as omicron fears rocked other asset classes.

Southwestern Energy Co. saw pricing tighten on its $550 million loan, an indicator of strong investor interest. It’s also selling a junk bond to help finance its acquisition of GEP Haynesville LLC. And the S&P/LSTA Loan Price Index, which measures the performance of the U.S. leveraged loan market, rose the most since June on Tuesday.

“The loan market has been quite hot this year,” said Christian Hoffmann, portfolio manager at Thornburg Investment Management. “Broadly the new issue machine is functioning like a high-output factory pumping stuff out.”

There are signs investors are moving money out of the space, though. U.S. leveraged loan funds have seen outflows of about $93 million between Thursday and Tuesday, the first four days of the reporting week that ends Dec. 8, according to JPMorgan Chase & Co., based on Refinitiv Lipper estimates. If the outflows persist Wednesday, it will be the second straight week of fund withdrawals following a $495 million outflow the prior week, the biggest in more than a year.

Billionaire money manager Jeffrey Gundlach sees “rough waters” ahead for financial markets and is advising keeping an eye on the high-yield bond market, a potential “canary in the coal mine” for risk assets.

Denmark, France and the European Stability Mechanism/European Financial Stability Facility have set out plans for next year to raise debt.