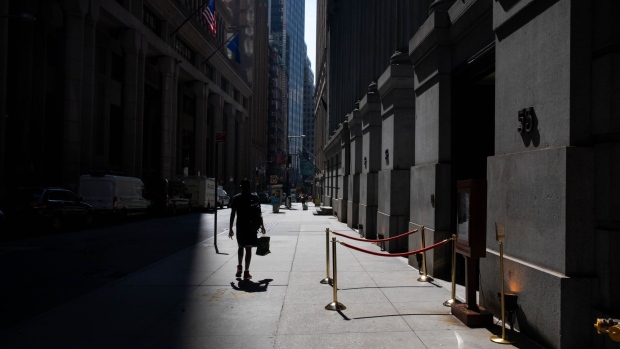 A pedestrian walks along Wall Street near the New York Stock Exchange (NYSE) in New York, U.S., on Monday, July 20, 2020. U.S. stocks fluctuated in light trading as investors are keeping an eye on Washington, where lawmakers will begin hammering out a rescue package to replace some of the expiring benefits earlier versions contained. Photographer: Michael Nagle/Bloomberg , Bloomberg

(Bloomberg) -- Digital marketing company CM Group has become the second company to withdraw a U.S. leveraged loan sale in as many days as some investors that buy the risky debt become more selective amid a year-end deal surge.

The four-year-old company, which owns Campaign Manager and other email marketing platforms, shelved a $590 million seven-year offering that was meant to help finance its merger with Cheetah Digital Inc. and refinance existing debt, according to people with knowledge of the matter.

Lead arranger Jefferies Financial Group Inc. withdrew the transaction on Friday, two weeks after commitments were originally due, said one of the people, who asked not to be identified because the discussions are private.

The companies don’t expect the withdrawal of the loan sale to derail the closing of the acquisition, according to a separate person with knowledge of the matter.

Borrowers have raised billions of dollars in the loan market this year to fund everything from leveraged buyouts to payouts to private equity owners. A late-year dash to wrap up acquisition financings got underway last week, but some investors are growing more cautious about adding risk to their portfolios.