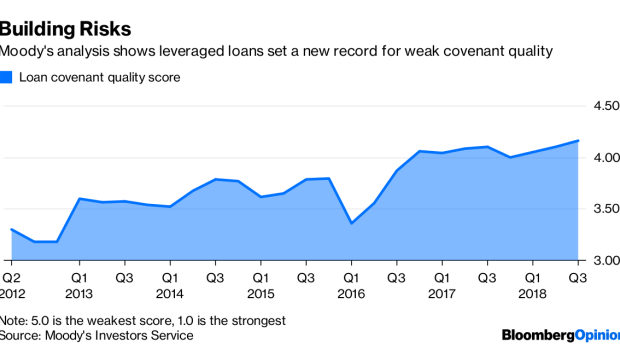 (Bloomberg Opinion) -- If a day of reckoning does arrive in the market for leveraged loans or collateralized loan obligations, as suggested most recently by Barclays Plc Chief Executive Officer Jes Staley, investors can’t say Moody’s Investors Service didn’t warn them.

In a report released Thursday, the credit-rating company said the market for leveraged loans in the U.S. and Canada is “now in uncharted territory” when it comes to the deterioration of investor protections. On a scale of 1 to 5, with a higher number reflecting weaker covenants, Moody’s indicator registered a reading of 4.16 in the third quarter of 2018, up from a previous record of 4.10 in the prior three-month period. Derek Gluckman, a senior covenant officer at Moody’s, pointed to strong demand for leveraged loans. It’s “a trend we expect to continue and to leave investors exposed to greater risks than ever before,” he said.

Moody’s includes a table of 22 loans it analyzed across seven categories, with most numbers flashing bright red. In fact, 19 of the 22 received the worst possible score for “financial covenants,” and about half got marks of 5 for “restricted payments” and “leveraging.” The most egregious loan, with a score of 4.64, came from The Hillman Group Inc. According to the most recent data compiled by Bloomberg, it resides in about 50 CLOs, which are pools of leveraged loans divided into tranches.

This is hardly the first time Moody’s has pointed out how loan issuers are chipping away at investor safeguards. In a deep dive into the asset class in August, analysts estimated that the average recovery rate on U.S. first-lien loans will probably decline to 61 percent in the next downturn, compared with a 77 percent long-term historical average. Second-lien loans may recoup only 14 percent, well below the 43 percent historical average, the analysts said. Moody’s rates about 29 percent of leveraged-loan issuers B3, compared with just 14 percent a decade ago. That includes Hillman Group, which as of September also had a negative outlook.

Because B3 is just one step above the Caa or triple-C tier, Moody’s has a lot of power over whether any sort of panic ensues. Many new loans have found their way into CLOs, and, as Bloomberg News’s Lisa Lee and Sally Bakewell pointed out last week, some of those managers are only allowed a certain allocation to triple-C-rated obligations. Breaking through that level could force funds to sell low-rated loans in order to pass tests designed to safeguard investors.

Notably, Moody’s reading of the leveraged-loan market is on a multi-month lag, which means it doesn’t include December. That marked the worst monthly loss for the asset class since August 2011. However, as I wrote before the selling intensified, the outflows and drop in loan prices represented a much-needed breather, and for once gave buyers the upper hand over sellers. There’s reason to expect that Moody’s covenant-quality indicator will retreat from its highs, if only slightly.

Still, just because leveraged-loan prices have bounced back some this month doesn’t mean the worst is over. For one, the World Economic Forum’s annual meeting in Davos has made clear that global leaders are nervous about slowing economic growth and the end of the credit cycle. Staley, Barclays’s CEO, said Thursday that it’s “more than likely” there will be another financial crisis, driven by a seize-up in credit markets. He specifically cited the growing market for CLOs — in the U.S., new issuance reached a record $130.4 billion in 2018. Guggenheim Partners Chief Investment Officer Scott Minerd said he expects the leveraged-loan market to get worse this year, in part because “all of the new incremental supply of loans went to CLOs.”

A pronounced turn in the credit cycle would bring all these issues to light. As Moody’s puts it, “provisions that threaten control of collateral, guarantees and lien priority will be particularly vexing for lenders to troubled credits in a downturn.” Some buyers who simply flocked to loans for yield will get burned for not being discerning. Others, with a long track record, were probably able to steer clear from the most troublesome deals. Of course, prognosticators have been calling for an impending recession for years, and it’s anyone’s guess whether one will materialize in 2019 or 2020.

At this point, there’s no shortage of hand-wringing over leveraged lending. It probably won’t be as bad as many fear, and the parallels between CLOs and the collateralized debt obligations of the financial crisis are likely too simplistic. Yet Moody’s analysis is a stark reminder to investors that if the going gets tough, it’ll pay to have been vigilant about covenants ahead of time.