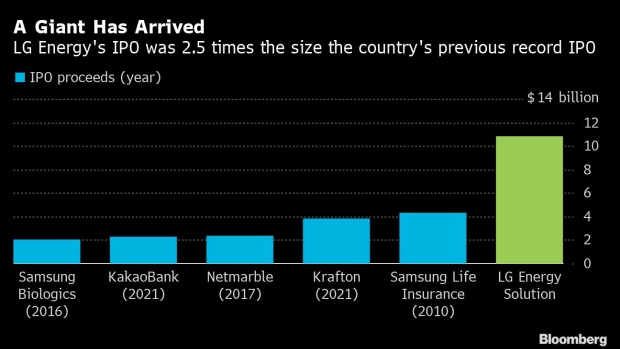 (Bloomberg) -- South Korea’s LG Energy Solution doubled in its first day of trading in Seoul, after raising close to $11 billion in the country’s biggest initial public offering on record.

The world’s second-largest battery maker soared as much as 99% above its IPO price of 300,000 won shortly after open. It will become the third-biggest stock on the benchmark Kospi, behind chipmakers Samsung Electronics Co. and SK Hynix Inc., representing about 3% of the index based on the IPO price.

LG Energy’s mega-deal attracted heavy demand from both individual and institutional investors, indicating continued appetite for new shares in South Korea after record IPO proceeds last year. The offering has been so popular that it sapped liquidity from shares already trading, helping to make the Kospi the worst-performing national equity benchmark in Asia this year.

The Seoul-based company is seeking to increase production capacity to meet burgeoning global demand for electric-car batteries and improve the quality of its cells following a $1.9 billion recall of General Motors Co.’s Bolt EVs. It also wants to close the gap with market leader, China’s Contemporary Amperex Technology Co.

LG Energy’s IPO raised 12.75 trillion won ($10.7 billion), with shares being sold at the top of an offered range. It was the second-largest offering in the world over the past year after Rivian Automotive Inc., and was about 2.5 times the size of Korea’s previous record listing, Samsung Life Insurance Co.

Parent LG Chem Ltd. will retain an 81.8% stake in the battery unit. The limited share float combined with the large number of investors unable to buy before the listing may cause large swings in LG Energy Solution’s stock in the short-term.

“There will be a lot of demand,” Kang Dong-Jin, an analyst at Hyundai Motors Securities Co, said before the stock started trading. “There are too few shares in the market so short-term volatility will be very big.”

The new market titan may also continue to lure funds away from other Korean stocks, according to Cho Byung-Hyun, an analyst at Yuanta Securities Korea Co.

“It is a must-get stock as it is so huge,” Cho said. “There will be money movement amid dumping of other stocks and adding LG Energy Solution in portfolios.”