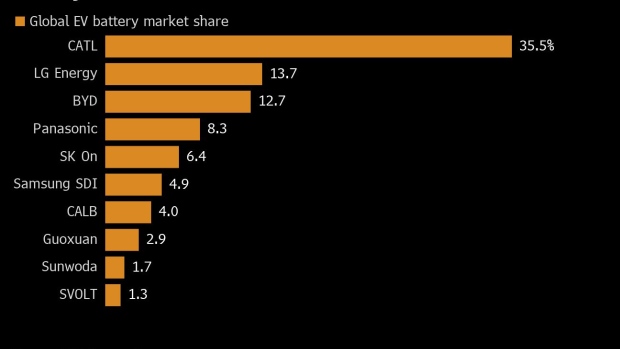 LG Energy’s shares rose 0.9% before the results, which were preliminary and released after the Korean stock market closed Friday. That took their gain in a holiday-shortened week to 13%. The company has yet to announce a date for final results.

The strong quarter came despite challenges that LG Energy has faced since its initial public offering in January, with the whole industry battling supply-chain disruptions and rising raw material prices. There are some concerns about the strength of EV sales: Tesla Inc. issued a disappointing deliveries report this week, interest rates are rising and used-vehicle sales are weakening, a sign that new-car sales could take a hit too.

LG Energy also became entangled in a trade dispute between Washington and Seoul over a US clean-energy law aimed at reducing EV makers’ dependence on Chinese minerals. South Korea’s three battery manufacturers -- LG Energy, Samsung SDI Co. and SK On Co. -- secure most of their minerals from Chinese suppliers.

Still, the US law could eventually be an opportunity for LG Energy because its supply chain is more diversified than rivals, Jeon Hyeyoung, an analyst at Daol Investment & Securities in Seoul, wrote in an Oct. 4 note.

Foreign investors have bought net 619 billion won of LG Energy shares since Aug. 8, when the US Senate passed the bill, making it the most favored stock on the benchmark Kospi.

The Korean won weakened about 9% against the dollar during the quarter.

Jeon said LG Energy’s outlook should be positive as production at Tesla’s Shanghai plant, which it supplies, has accelerated since September, while its Ultium Cells LLC joint venture with General Motors Co. is starting pilot production of batteries in the fourth quarter.