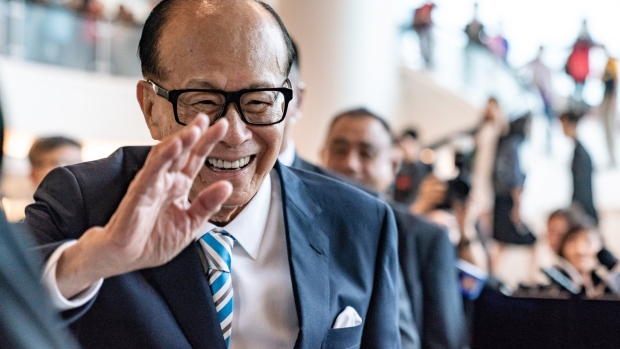 It’s an unexpected bet by Hong Kong’s richest man: a penny stock seeking to modernize clinics for Canada’s overstretched family doctors, many of whom are stuck in the age of paper charts.

Billionaire Li Ka-shing is the biggest outside investor in Well Health Technologies Corp. (WELL.V), a Vancouver-based startup that’s acquiring clinics and electronic medical records providers to bring Canada’s highly fragmented primary care market into the digital era. Its shares have more than doubled this year, making it one of the top-performing health-care stocks on the TSX Venture Exchange.

Li’s other healthcare forays include a cancer drug developer and a company holding the patent for a chemical that purportedly defies aging. His Canadian bet is a decidedly more pragmatic affair.

Canada’s healthcare system is often vaunted for providing free, tax-funded medical treatment for all -- a portrayal colored rosier in part by the contrast with U.S. healthcare to the south. But the system is also cumbersome and imposes agonizingly long wait times on patients, largely because it’s one of the least digitized systems among developed economies, says Hamed Shahbazi, Well Health’s chief executive officer and founder.

Shahbazi describes Well Health as “the WeWork for doctors” -- bringing them software tools they couldn’t otherwise afford as standalone clinics. That makes their practices more efficient, meaning better outcomes and shorter waits for patients, he says. Doctors can join Well Health’s growing chain of clinics under a revenue-sharing agreement or simply pay for the services of the company’s medical electronic records software.

There’s plenty of room for improvement. Canada’s primary care doctors, who can see as many as 50 patients a day, have been sluggish to adopt the most basic technologies. Walls of paper folders are still the norm, online patient portals are almost unheard of, and people can while away hours in waiting rooms.

Canada scored the worst out of 11 high-income nations, including the U.S., in terms of wait times for emergency-room care, specialists, and elective surgery in a 2017 study by the Commonwealth Fund. Compared to universal healthcare systems in other developed economies, Canada is one of the most expensive, with modest to poor performance -- in part due to its lower-than-average adoption of medical technologies, according to the Fraser Institute.

“Which industry do you know still operates like it did 40 years ago?,” says Shahbazi. “We’re one of the most broadband-connected countries in the world -- it seems totally counter intuitive that we lack any kind of digitization in primary care.”

It’s a lucrative market: Canada is estimated to have spent $254 billion, or $6,839 per person, in 2018 on healthcare, according to the Canadian Institute for Health Information. It’s also “an attractive, recession-resilient business,” says Gabriel Leung, a Toronto-based analyst at Beacon Securities Ltd.

Well Health is now Canada’s third-largest provider of electronic medical records following a string of acquisitions, servicing more than 850 clinics, according to Daniel Rosenberg, an analyst at Haywood Securities Inc., who believes the company’s shares are undervalued. All four analysts have “buy” recommendations on the stock.

Shahbazi is a familiar name in Canadian tech circles for his sale of a bill payment processor to PayPal for $304 million in 2017. Well Health, he believes, has “many, manyfold greater potential,” largely because the field is wide open: Canada’s largest chain of health-care clinics is only 34 offices compared with chains of hundreds in the U.S., he says.

He says he captured the interest of Li thanks to an acquaintance with a long-time confidante of the billionaire, Solina Chau.

Chau runs Horizon Ventures, Li’s prodigious venture capital arm that was an early backer of Facebook Inc., Spotify Technology SA and Siri and is the primary channel of investment for the billionaire’s wealth. In the past 14 months, Horizon Ventures has participated in at least two rounds of funding in Well Health, while Li bought $500,000 in convertible bonds through a holding company in June, according to company filings.

Li owned 11 per cent of outstanding shares, making him the second-biggest investor after Shahbazi, according to a May filing. Chau didn’t respond to a request seeking comment.

Well Health traded at 96 cents Wednesday in Toronto, for a market value of $93.5 million.

Longer term, Well Health plans more ambitious technological roll outs, such as telemedicine. While only about 2 per cent of cases are conducted remotely in Canada at present, about 60 per cent of primary care visits could be done just as easily over an iPhone, according to Shahbazi.

“A clear, irrefutable trend across the world is that there’s a growing number of patients for a not-growing-as-fast-enough number of physicians,” says Shahbazi. “So in an environment where not everyone’s going to have a family doctor to provide long-term care, the equalizer is technology.”