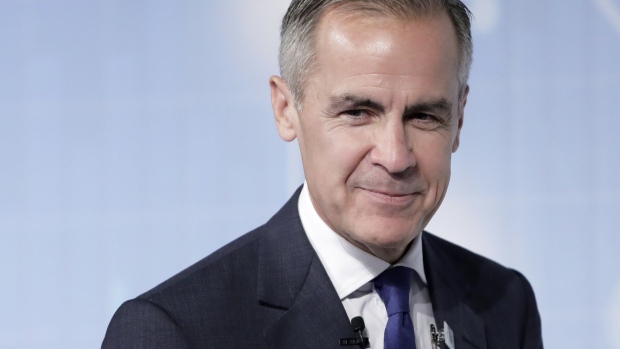 Mark Carney, governor of the Bank of England (BOE), leaves the stage after speaking at the Task Force on Climate-related Financial Disclosures (TCFD) Summit in Tokyo, Japan, on Tuesday, Oct. 8, 2019. , Bloomberg

But the former governor of the Bank of Canada and the Bank of England left Liberals guessing whether he'll actually run for the governing party in the next election.

“To me, humility means recognizing the great good fortune that I've had growing up and the responsibility of service that comes with that,” Carney told Liberals at their virtual convention.

“And that's why I'll do whatever I can to support the Liberal party in our efforts to build a better future for Canadians.”

He did not say whether that means running as a Liberal candidate. Rookie Toronto MP and convention co-chair Marci Ien, who posed questions to Carney after his speech, didn't ask. There was no opportunity for journalists to pose questions after the event.

However, the live chat forum on the convention website was instantly flooded with Liberals, who've long dreamed of Carney as a potential leader one day, urging him to take the next step.

But a few voiced skepticism, including one Liberal who asked: “Anyone else getting Ignatieff vibes from this guy?” - a reference to Michael Ignatieff, a world-renowned academic and intellectual who led the Liberals to their worst defeat in history in 2011.

Earlier Friday, Prime Minister Justin Trudeau dodged questions about Carney's political future, twice refusing to say whether he has encouraged the former central banker to run. He characterized Carney's convention debut as simply a matter of Liberals tapping his expertise on economic policy and on climate change.

“The Liberal party has a long history of welcoming in expert speakers at our conventions from a range of different backgrounds,” Trudeau told a news conference on the COVID-19 pandemic.

“We're very pleased to have someone of the stature of Mark Carney who has been working very, very hard on, among other things, the intersection between the global economy and the fight against climate change.”

Carney is currently the United Nations special envoy on climate action and finance.

Trudeau said Carney's star turn at the convention is another example of how Liberals are listening to “the best and the brightest from around the world” on how to navigate the COVID-19 pandemic and “build back better” the ravaged economy.

Political rivals didn't wait for Carney's speech, much less an answer to the will-he-run question, before trashing him as a wealthy, out-of-touch elitist.

“While Liberals continue to court the approval of the ultra-rich and well connected, New Democrats will continue to fight for working people,” the NDP said in a statement.

“After getting chased out of the United Kingdom for billing more than $500,000 in travel expenses for 52 trips to exotic places, often on fossil-fuel-powered jets, Carney will preach to Canadians about the need for higher energy prices,” predicted Conservative MP Pierre Poilievre in a statement released shortly before Carney's speech.

“He will also promote trendy new economic experiments that are popular with Davos billionaires.”

While he was still Bank of Canada governor in 2012, Carney quietly flirted with the idea of a leadership run, courted by Liberals desperately searching for a new saviour after Ignatieff's flame-out.

But amid criticism that even the smallest whiff of partisanship was undermining the independence crucial to a central banker, Carney eventually squelched the speculation by saying he'd just as soon become a “circus clown” and then left Canada to take over the helm of the Bank of England.

He has been coy about his political ambitions since returning to Canada last summer and releasing a book last month promoting his vision for a new kind of capitalism that combines the pursuit of profit with social purpose.

He reiterated Friday his view that the COVID-19 pandemic offers an opportunity to reset the way the world works, making it more inclusive, more equitable and more environmentally sustainable - a view that dovetails neatly with the thinking of Trudeau's government.

His convention appearance came little more than a week before Finance Minister Chrystia Freeland, herself seen as a potential successor to Trudeau, is to deliver her first budget.

It is expected to lay out in detail the cost of supporting Canadians through the pandemic, which has already sent the national deficit soaring past $380 billion, along with a plan to spend up to $100 billion more to fuel a more equitable, green, inclusive economic recovery.

Carney endorsed that approach in his speech.

“People know that spending only on the present won't deliver a better future for them and their children. So once we exit COVID, we will need broad-based growth driven by investments in the digital and sustainable engines of our future and policies that support the full participation of all Canadians in our economy.”

Carney congratulated Trudeau for his leadership on climate change and the government's goal of achieving net-zero carbon emissions by 2050. He called Canada's progress on the file as an “inspiration” to the world.

However, the Liberals' record on climate change came under scrutiny ealier at the convention during a conversation between Laure Waridel and Canadian Heritage Minister Steven Guilbeault. The pair co-founded the Quebec-based environmental group Equiterre.

Waridel bluntly asked Guilbeault why the Liberals haven't delivered on their promise to eliminate fossil fuel subsidies. She said the government should admit it was wrong to purchase the Trans Mountain pipeline expansion project and urged for it to be cancelled, predicting the Liberals would win a lot of votes in Quebec if they did.

For his part, Trudeau took a poke at the Conservatives, who refused at their convention last month to accept a resolution recognizing the reality of climate change.

Liberals, he said, won't spend their convention “debating about whether climate change is real. That debate is settled for Canadians.”

Trudeau declined to take a position Joan Bryden on two resolutions being pushed by his own caucus and grassroots Liberals young and old, that urge his government to introduce a universal basic income. He has in the past been lukewarm towards the idea, suggesting now is not the time for a major overhaul of the country's social safety net.

But the resolutions, which will be put to vote Saturday, generated considerable debate in the chat forum and in two workshops at the convention later Friday. While many participants were enthusiastic, others expressed concern that a basic income would replace existing support programs and actually leave some people, like those with disabilities, worse off.

Winnipeg Liberal Gregory Liverpool told a workshop that single mothers and people with disabilities would lose $5,000 in benefits under a basic income. People with disabilities have not received enough federal support during the pandemic, he added, saying they've been “totally left out by this government and this party.”

Another participant with a disability agreed a basic income “would be ableism at its finest,” while others worried about the cost and others about the lack of detail.

Toronto MP Julie Dzerowicz countered that a basic income would streamline a multitude of federal and provincial support programs and would be designed on the principle that everyone should be left better off.

Trudeau, and all other party leaders, insist they don't want an election during the pandemic. But since the Liberals hold only a minority of seats in the House of Commons, the government could fall or trigger an election at any time and all parties are getting ready for one.

Trudeau announced Friday the co-chairs of the Liberal campaign “whenever it arrives” - Economic Development Minister Melanie Joly and Mississauga MP Navdeep Bains, who resigned from cabinet earlier this year after deciding he won't seek re-election.