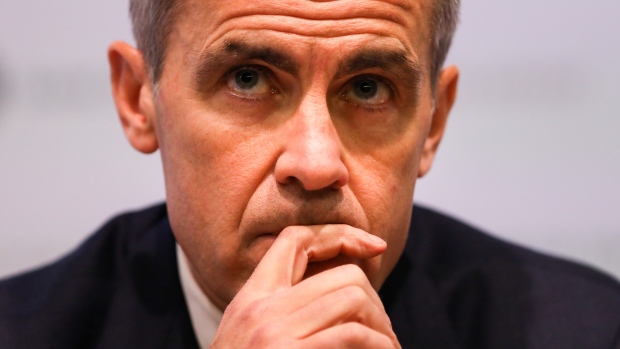 Mark Carney, governor of the Bank of England (BOE), pauses during the bank's quarterly inflation report news conference in the City of London in London, U.K., on Thursday, Nov. 1, 2018. The BOE hinted there may be a need for faster rate increases in the coming years in a report dominated by uncertainty over Brexit. , Bloomberg

A group of Liberal Party insiders has discussed the possibility that Bank of England Governor Mark Carney could replace Prime Minister Justin Trudeau as leader of their party, the Toronto Star reported.

Carney’s name came up in a conference call of “backroom players” discussing Trudeau’s waning fortunes ahead of an October general election, according to the newspaper, which cited an unidentified participant on the call. A poor showing for Trudeau could open the door for Carney to succeed Trudeau, the Star said.

The newspaper cited efforts by a “similar group” to recruit Carney in 2012 when he was governor of the Bank of Canada. Carney’s term at the Bank of England ends in January.

Trudeau has seen his popularity sink in recent months amid accusations from his former attorney general that he and his office pressured her to end a prosecution against the Montreal-based construction company.

Aggregate polls maintained by the Canadian Broadcasting Corp. show the Liberals with 30% support, compared to 36 per cent for the opposition Conservative Party.