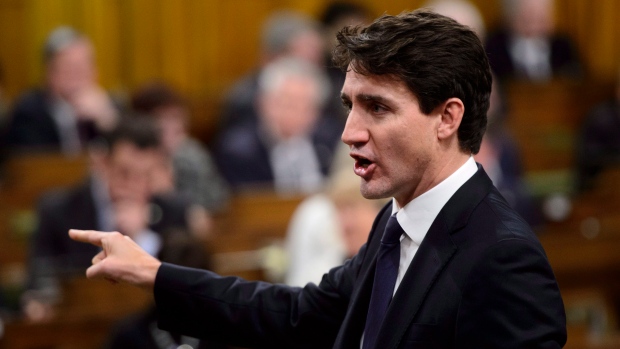 Prime Minister Justin Trudeau stands during Question Period in the House of Commons on Parliament Hill in Ottawa on Tuesday, Nov. 20, 2018. , The Canadian Press

Only one of six Liberal MPs on the 10-member House of Commons ethics committee supported a Conservative motion to call Dion, and possibly others, to testify about the report.

The lone Liberal outlier, Toronto MP Nathaniel Erskine-Smith, supported the motion only because he said he wanted Dion to explain what he considered the commissioner's “legally flawed” conclusion that Trudeau broke the Conflict of Interest Act.

All six Liberals voted against a subsequent NDP motion to call Trudeau, Finance Minister Bill Morneau and his former chief of staff, Ben Chin, to testify about their roles.

They were joined by New Democrat Charlie Angus in defeating another Conservative motion that would have called on CBC journalist Aaron Wherry to table all his recordings and notes on the SNC affair from interviews with Trudeau in his newly released book on the prime minister's first term in office, “Promise and Peril.”

Speaking for his fellow Liberals, Quebec MP Steven MacKinnon dismissed the motions as blatantly partisan attempts to re-ignite public outrage over the SNC-Lavalin controversy on the eve an election call.

“This has been an exhaustively analyzed situation,” MacKinnon said following the three-hour emergency meeting.

“We've had 13 hours of testimony, we've had 10 witnesses, we've had five weeks of hearings (by the justice committee), a 63-page report (from Dion).”

He called the attempt to force further hearings “a partisan game,” in which opposition parties deployed “their most partisan, paint-peeling members” to Wednesday's committee meeting. He was referring to deputy Conservative leader Lisa Raitt and Ottawa MP Pierre Poilievre, both of whom spoke at length, although they couldn't vote on the motions because they're not committee members.

“So I think we all know that on the eve of an election, this kind of partisan gamesmanship by the opposition is what it exactly appears to be,” said MacKinnon.

“Instead, they joined the prime minister in attempting this coverup. They are complicit in his attempt at obstruction of justice.”

Kent also referred to MacKinnon, who was filling in on the committee for another Liberal MP, as a “hit man” deployed by the Prime Minister's Office to gag his fellow Liberals.

Green party Leader Elizabeth May acknowledged that the SNC controversy is “red meat right before an election” but insisted that wanting to get to the bottom of the affair is not partisan. She reiterated her belief that Trudeau is “guilty of a kind of offence for which resignation is appropriate.”

“I think the whole SNC-Lavalin matter stinks to high heaven and deserves another inquiry,” she said.

Dion was standing by, prepared to immediately testify via video conference had the committee voted to hear from him. As it turned out, he needn't have bothered.

In a report released last week, Dion concluded that Trudeau broke the Conflict of Interest Act by improperly pressuring former attorney general Jody Wilson-Raybould to halt a criminal prosecution of SNC-Lavalin on corruption charges related to contracts in Libya.

Dion also disclosed in his report that he couldn't get all the information he required, as potential witnesses claimed cabinet confidence stopped them from sharing everything they knew.

Trudeau has acknowledged that he wanted Wilson-Raybould to reconsider her refusal to overturn a decision by the director of public prosecutions, who decided last fall not to invite the Montreal-based engineering and construction giant to negotiate a remediation agreement.

Such an agreement would have allowed the company to avoid the risk of a criminal conviction, which would result in it being barred from federal contracts for 10 years.

While he has taken full responsibility for the mistakes that were made, Trudeau has refused to apologize. He has insisted that he was only standing up for the interests of SNC-Lavalin's 9,000 innocent employees, pensioners and suppliers, who stood to be negatively affected by the potentially crippling cost of a conviction.

MacKinnon repeatedly stressed that it's the prime minister's responsibility to stand up for jobs. But opposition MPs derided the contention that jobs were at stake, noting that Dion's report detailed how no one in either the PMO or Morneau's office conducted an economic impact analysis.

Angus demanded that MacKinnon provide evidence of potential job loss “or spare us these Liberal talking points that have been proven false.”

However, Independent MP Erin Weir, a former New Democrat, gave the Liberals some surprise support on that front.

“Whether or not members of the committee believe the figure of 9,000 jobs, I don't think anyone would dispute that going after the company as a whole is going to have negative consequences for a lot of people who are totally blameless in this whole thing.”

Erskine-Smith, who has parted company with his fellow Liberals in the past over the SNC affair, said Wilson-Raybould herself should have asked for an economic analysis before making a decision on the SNC prosecution. While he reiterated his belief that improper pressure was applied to the former attorney general, he disagreed with Dion's conclusion that the pressure constituted a violation of the Conflict of Interest Act.

“Making mistakes to stand up for the public interest is not a conflict of interest,” Erskine-Smith said.

Weir concurred that Dion's conclusion could be “open to challenge,” hinging on the commissioner's interpretation of the word “improper” in the Conflict of Interest Act.

But May and Angus zeroed in on what they described as new information in Dion's report about the extent to which SNC-Lavalin had access to Trudeau, Morneau and other ministers and their staff to lobby relentlessly for a new law allowing for remediation agreements and later to undermine Wilson-Raybould's refusal to use the law to intervene in SNC's case.

“That there, my friends, is collusion. That there is conspiracy,” said Angus.