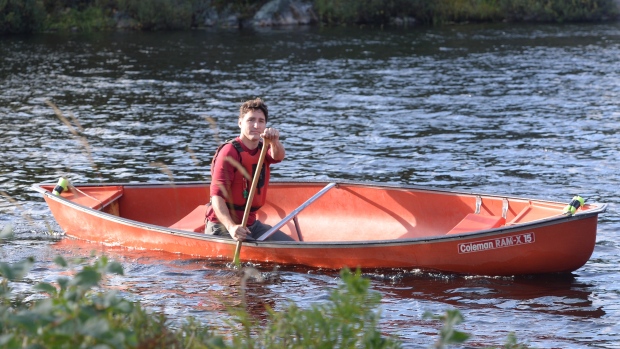 Leader of the Liberal Party of Canada Justin Trudeau paddles a canoe at the Lake Laurentian Conservation Area in Sudbury, Ontario on Thursday Sept. 26, 2019. , THE CANADIAN PRESS/Ryan Remiorz

SUDBURY, Ont. -- The federal Liberals say one-fourth of Canada's land will be given protected status over the next six years if they are re-elected.

Leader Justin Trudeau is also promising to protect one-fourth of Canada's oceans by 2025.

He made the announcement after paddling a canoe in the Lake Laurentian Conservation Area in Sudbury, Ont. this morning.

Trudeau said 30 per cent of Canadian land and ocean areas will be protected by 2030, and he will push the rest of the world to follow suit.

He said Canada has already exceeded the marine goal with almost 14 per cent of Canadian coastal waters protected.

The protected ocean areas went over the limit in August with the addition of the Tuvaijuittuq Marine Protected Area off the coast of Ellesmere Island in Nunavut, which covers more than 5.5 per cent of all Canadian coastal and marine areas.

Trudeau is also promising to expand the Learn to Camp program, which gives travel bursaries to lower income families to spend up to four nights in one of Canada's national or provincial parks.