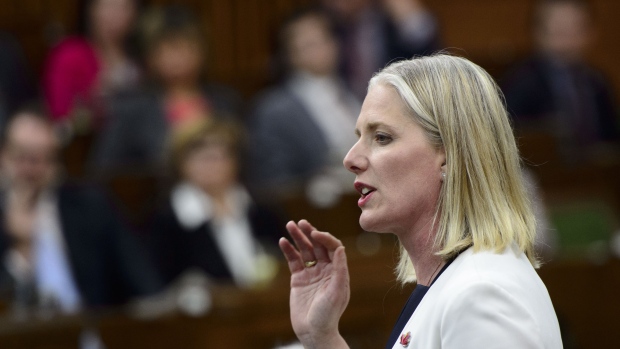 Minister of Environment and Climate Change Catherine McKenna stands during question period in the House of Commons on Parliament Hill in Ottawa on Tuesday, June 18, 2019. , THE CANADIAN PRESS/Sean Kilpatrick

VANCOUVER -- Companies that produce zero-emission technologies will pay half as much income tax if the Liberals are re-elected, leader Justin Trudeau promised Tuesday, as the party took heat over a lack of details in its climate plan.

Tuesday's announcement marked the first specific new climate policy coming from the Liberal camp, which was criticized earlier for promising to ramp up Canada's cuts to greenhouse gas emissions without saying how.

At an event in Burnaby, B.C., Trudeau said the number of kids around the world, including in Canada, who have been staging climate strikes to demand more action is a call that every government must heed.

Kids, he said, just get that the world needs some drastic action to halt climate change.

"Years from now I want to look my kids in the eye and say 'we stepped up,"' Trudeau said.

The Liberals announced early Tuesday that they will increase Canada's climate-action ambition by charting a path to deepen greenhouse-gas emissions cuts over the next decade and get to net zero emissions in Canada by 2050.

That plan echoes a promise made by 66 other countries at this week's UN Climate Summit, which Canada is not officially attending because of the election.

Trudeau said the Liberal plan has already mapped out how to get three-quarters of the way to the existing goals under the Paris climate change agreement -- emissions cut to 70 per cent of what they were in 2005 by 2030. The Liberals will be finding a way to exceed that goal, including introducing legislation requiring five-year targets and reporting, and then will get to net zero by 2050, he said.

There are few details yet on how that will happen, with more policies promised to be coming. The first, unveiled Tuesday, will cut the corporate and small business tax rates for companies that make zero-emission technology, including renewable energy, electric cars, their batteries or charging systems, and carbon-sequestration systems.

Green Party Leader Elizabeth May has also included the pledge to be carbon neutral by 2050 in her platform. NDP Leader Jagmeet Singh's plan promises to do what scientists say has to be done to stop climate change.

The Liberals intend to appoint an expert panel of scientists to advise them on the best ways to become carbon neutral.

"This is the next great economic frontier," he said.

Scientists say that while achieving net zero emissions requires significant changes to nations' economies and the almost total end to burning fossil fuels, it's the only way to stop global warming going beyond 1.5 degrees Celsius this century.

A number of other countries including the U.K., France and Germany have already pledged themselves to achieving the goal.

The Liberal party said net zero would mean some sectors would still produce carbon pollution, but would have to offset those emissions by other actions, such as planting trees.

The announcement comes as cities around the world are preparing for the latest wave of massive, youth-led mobilizations demanding environmental action.

Sixteen-year old Swedish environmental activist Greta Thunberg, who delivered a scathing rebuke to world leaders at the UN Summit on Monday, will be in Montreal later this week to take part in a climate march.