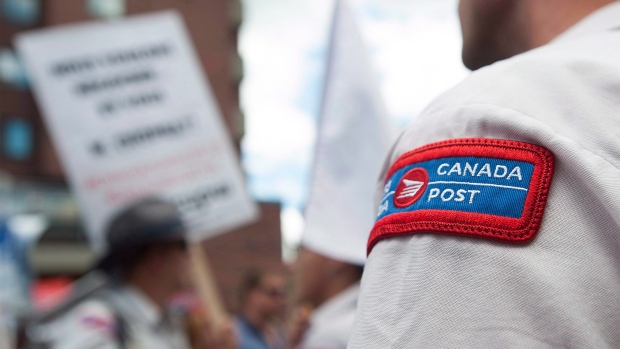 OTTAWA -- A program launched by the Harper Conservatives to end door-to-door mail delivery in Canada was formally ended Wednesday by the Trudeau government as part of a new plan the Liberals say will eventually put Canada Post on a more sound financial footing.

However, the roughly 840,000 households that have converted to community mail boxes since 2014 were told they won't get the service back -- a decision postal workers and the opposition New Democrats declared a broken promise.

Public Services Minister Carla Qualtrough, who announced the plan at a mail sorting plant in a Toronto suburb, said the cost of restoring home delivery was just too great.

"We did a cost analysis, we looked at the potential disruptive impact that might have, and we decided to adopt a forward-looking vision for Canada Post," Qualtrough said.

"Basically, we're not going to put the toothpaste back in the tube."

The Liberals froze mailbox conversions after coming to power in 2015. The decision to make that freeze permanent means Canada Post won't realize an estimated $350 million in annual savings from ending door-to-door delivery for the remaining 4.2 million addresses across the country that still get mail dropped at their doorstep.

At least one analyst warned that will hamper the Crown corporation's ability to remain self-sustaining, and merely kicks the problem of collapsing letter mail volumes down the road.

"This is going to become a great big black hole for the government," said Ian Lee, a professor at Carleton University's Sprott School of Business.

Canada Post said it made a profit of roughly $81 million from all of its operations in 2016, down from $99 million the previous year. It called the new plan "a valuable blueprint" it can use to ensure the corporation remains financially strong.

A Liberal-dominated House of Commons committee recommended more than a year ago that the post office devise a plan to reinstate door-to-door delivery. But the price tag for doing that would reach $195 million, plus ongoing costs of about $90 million annually, Canada Post estimated.

The Liberals vaguely promised during the 2015 election campaign to "save home mail delivery" after an outcry over the community mailbox conversion plan. The Canadian Union of Postal Workers took that to mean restoring services that were cut, said the union's national president, Mike Palecek.

"The Liberals were elected on a promise to restore door-to-door and to consult on a new vision for Canada Post," Palecek told an Ottawa news conference.

"Some four million households can rest easy that their ... service will not be cut, but more than 800,000 are still out in the cold."

"It's not acceptable," echoed New Democrat MP Charlie Angus. "It's certainly not acceptable to the seniors I talk to who have difficulty at these (community) post office boxes."

Acknowledging that some vulnerable Canadians might have difficulties getting their mail from a community box, Qualtrough announced a task force will be struck to examine ways of upgrading and better promoting the corporation's existing accessibility program for seniors and people with mobility issues.

The minister also announced changes to the financial rules that drive Canada Post, allowing it to make a profit and then re-invest the extra money back into operations to improve services and remain self-sustaining over the long run.

Senior leadership at the post office, which is in the midst of a large-scale turnover that includes a search for a new CEO, will also be mandated to establish more cordial labour relations. Canada Post and CUPW are currently in contract negotiations.

As well, the government is encouraging Canada Post to promote its postal money order business to Canadians who send money to friends and family abroad. CUPW had called instead for a re-introduction of banking services at postal outlets as a way to make money but that idea has been rejected.

The government will also ask Canada Post to capitalize on a boom in its parcel services, since that's where the money and growth are.

Canada Post will be expected to look at how other countries have used weekend delivery or parcel lockers to bolster their postal service revenues.

The government will also be looking at ways to leverage the fact that Canada Post has a presence in even the smallest of Canadian communities, and could be used to deliver other government services, something Palecek said he found heartening.

"We will support any expansion of Canada Post services," he said.

Under the new Liberal plan, community mailboxes will continue to be installed in new housing developments, a practice that's been ongoing since the 1980s.