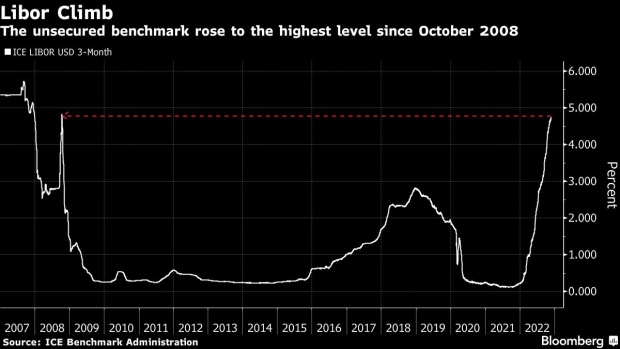 (Bloomberg) -- The three-month London interbank offered rate for dollars climbed to the highest level since the financial crisis in an otherwise quiet day for the front-end of fixed income markets.

The benchmark rate for lending between banks rose for the third straight session, climbing roughly 5.9 basis points to 4.75729%, the highest since October 2008. The spread of Libor over overnight index swaps -- a barometer of funding pressure -- widened to 34 basis points on Wednesday from 29.6 basis points the prior session.

Such moves in the Libor are usually driven by expectations of Federal Reserve interest rate hikes. But with a 50 basis point hike already priced in ahead of the central bank’s December meeting, commercial paper transactions may be the bigger driver as banks ensure they are funded for the end of the year. These short-term obligations underpin Libor settings. The rate for the highest rated financial paper rose to 4.63% as of Nov. 22, from 4.59% the previous session, Fed data show.

“The general wideness is that this is a lenders market,” said Blake Gwinn, head of US interest rates strategy at RBC Capital Markets. “No one wants to extend out given the hiking cycle, so the ball is more in the lenders’ court on pricing.”

In aggregate, bank commercial paper funding transactions in the three-month tenor traded 4 basis points above the three-month Libor last week, according to JPMorgan Chase & Co. Libor and non-Libor panelists on average were executing three-month trades at 4.63% and 4.73% as of Nov. 15.

--With assistance from Boris Korby.