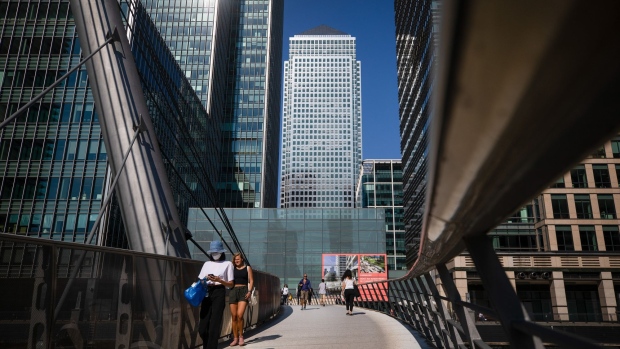 Pedestrians pass along a walkway in the Canary Wharf business, financial and shopping district of London, U.K., on Monday, Sept. 14, 2020. Londoners are steadily increasing their use of public transport after schools reopened, freeing parents to go back to the workplace. Photographer: Simon Dawson/Bloomberg , Bloomberg

(Bloomberg) -- Delaying the end of dollar Libor until mid-2023 may provide breathing room, but it doesn’t remove the need for a legislative solution for contracts that will still be linked to the benchmark when it eventually expires.

That’s the view of Tom Wipf, who heads the Federal Reserve-backed group responsible for guiding the shift away from the London interbank offered rate in the U.S. There may be hundreds of billions of dollars of legacy contracts that lack a clear replacement rate and pose a threat to financial stability, meaning that policy makers still need to find answers.

“The most challenged floating-rate debt and securitizations, and also most Libor mortgages and student loans, go well beyond the 2023 date,” said Wipf, who is chairman of the Alternative Reference Rates Committee and vice chairman of institutional securities at Morgan Stanley. “For these tough legacy products, there will still be a lot outstanding after that 18-month period.”

After years of steadfastly maintaining that the beleaguered London interbank offered rate would be phased out by the end of 2021, regulators abruptly shift course on Monday, pushing back the timeline for abandoning some of the discredited benchmark’s key tenors. While the delay should allow for many contracts tied to Libor to expire naturally, the need for legislation to ensure those that linger are dealt with remains “front and center,” Wipf said in an interview Wednesday.

Officials have largely struggled to find a solution to the legacy-contract issue, which stretches across numerous markets.

The ARRC has been lobbying New York state lawmakers since March for legislation that would impose a replacement benchmark -- the Secured Overnight Financing Rate -- on financial products that lack a viable fallback.

While little headway was made initially, in October a bill was introduced in the state Senate. It likely won’t be taken up by the legislature until the next session begins in January, at the earliest.

As part of Monday’s announcement, U.S. regulators encouraged banks to cease entering into new Libor-linked contracts by the end of 2021. The Fed made clear that writing new Libor contracts beyond then would be seen as unsafe and unsound banking practice, and that the central bank would supervise firms that did accordingly.

Certain Libor-based instruments such as residential-mortgage backed securities that require unanimous investor consent to amend are among the most problematic to transition, and therefore the most in need of a legislative solution, according to Y. Daphne Coelho-Adam, counsel in the corporate finance group at law firm Seward & Kissel in New York.

“We’re looking at very large portfolios that banks are probably holding,” she said. “If you have a globally held note, it can be difficult to get 100% note-holder consent for even the most non-controversial amendments. When changing an interest rate, not every investor will necessarily be on board.”