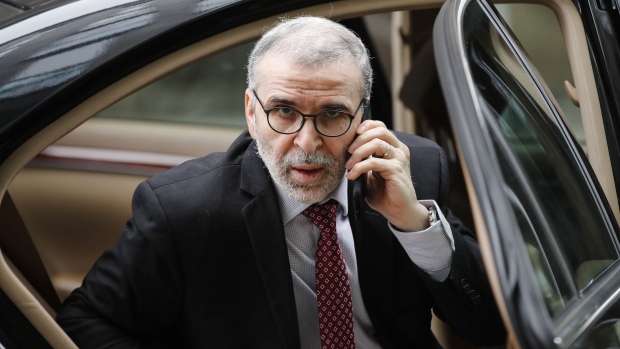 Mustafa Sanalla, chairman of the National Oil Company of Libya, arrives ahead of the 177th Organization Of Petroleum Exporting Countries (OPEC) meeting in Vienna, Austria, on Thursday, Dec. 5, 2019. Saudi Arabia, the dominant force in OPEC, is using both carrot and stick to talk other members of the oil cartel into defending prices at Thursday’s ministerial meeting. , Bloomberg

(Bloomberg) -- Demonstrators have interrupted loading of an oil tanker and taken over the control room at Libya’s biggest crude terminal, as a fresh wave of protests across the nation’s ports threaten to derail months of stability in the OPEC member’s production and exports.

Protesters calling for the dismissal of Mustafa Sanalla, state-run National Oil Corp.’s chief, have prevented Suezmax tanker Yannis P from loading, according to three people with knowledge of the matter who asked not to be identified because of lack of authorization to speak to media. They have also commandeered a control room at the Es Sider terminal, which processes 300,000 barrels of crude a day.

Officials at the NOC were not immediately available to comment.

There have been frequent protests at Libya’s main oil fields over the past decade, with groups using blockades of facilities to press for political or economic demands.

Although the nation has Africa’s largest crude reserves, production has been erratic since the overthrow of former leader Moammar Qaddafi in 2011. A truce last year in the country’s long-running civil war, combined with the formation of a unity government, have helped stabilize output in recent months at almost 1.2 million barrels a day.

Demonstrations have also erupted at the key Hariga port, with students and young graduates demanding jobs. The new wave of protests, along with a power struggle between the minister of oil Mohamed Oun and Sanalla, are threatening Libya’s recovery in crude production.

Tension between Oun and Sanalla has grown over recent weeks after the oil minister asked the government to dismiss the NOC chief and reshuffle the company’s board. The jostling follows a decade of conflict and tension between rival governments that eased after the formation of a unity authority.

Oun was appointed in March, making him the country’s first oil minister since 2014. Sanalla, meanwhile, has been the NOC’s boss since 2014 -- holding a job that allowed him to effectively run the energy sector, including representing Libya meetings between the Organization of Petroleum Exporting Countries and its allies.