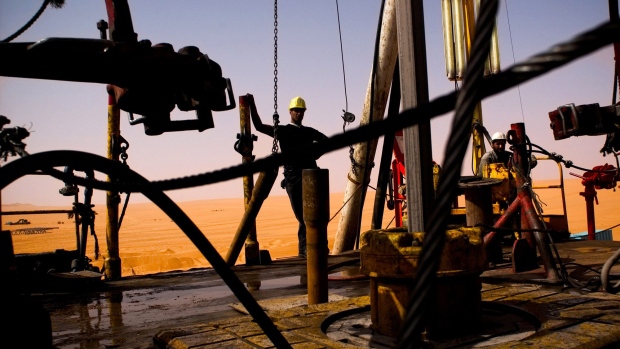 A Repsol Oil Operations oil drilling rig pounds into the desert searching through thousands of feet for and oil reserve on June 5, 2004 in El-Sharara, Libya. , Photographer: Benjamin Lowy/Getty Images

(Bloomberg) -- Libya’s biggest oilfield is gradually resuming production that had been halted by an almost five-month blockade, an official said Saturday.

The restart of the Sharara field in the country’s southwest comes after a valve on the pipeline running to the port of Zawiya was reopened on Friday, according to Ali El-Zeeb, the commander of the petroleum facilities guards aligned with Libya’s internationally recognized government. Before the shutdown in mid-January, Sharara was producing as much as 300,000 barrels a day.

The restart of the field, which is operated as a joint venture between the National Oil Corp. and Total SA, Repsol SA, OMV AG and Equinor ASA, follows the fall-back from western Libya of fighters loyal to Khalifa Haftar, the eastern-based commander who’s been battling to seize the capital, Tripoli, from the United Nations-backed government for more than a year.

Supporters of Haftar have blockaded major oilfields and ports since January, cutting output in the North African nation from as much as 1.2 million barrels a day to some 90,000 barrels. The reduction has had the inadvertent effect of helping OPEC+ in re-balancing the global oil market.

Haftar said Saturday in Cairo that he was accepting an Egyptian-sponsored cease-fire and a political initiative to end the war, steps that could open the door to the eventual full recovery of production.