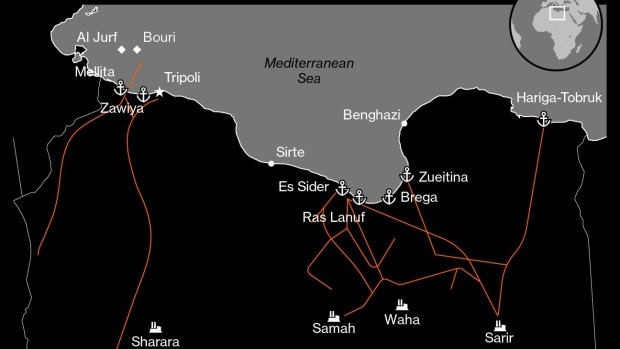 (Bloomberg) -- Libya’s oil industry continued its revival this week following a truce between the main factions in the OPEC member’s devastating civil war.

The Sarir field opened on Tuesday, according to its operator, Arabian Gulf Oil Co. Production is just 30,000 barrels a day for now. But with a capacity of about 200,000, it’s the biggest deposit in the country to restart since an almost-total shutdown of Libyan energy facilities in January.

Much of the country’s “oil crescent” -- a cluster of ports and fields in the east -- is back onstream, though not yet at full capacity. Libya’s western fields, including Sharara, the biggest in the North African nation, are still closed. The state-run National Oil Corp. has said foreign mercenaries and other fighters must leave facilities before than can reopen.

Libya has seen false dawns before, and previous deals to stop the conflict have quickly collapsed. But if this one holds, JPMorgan Chase & Co. forecasts that production can hit 1 million barrels a day by March.

The potential for extra Libyan supplies is putting pressure on oil prices just as traders fret about the outlook for energy demand with the coronavirus pandemic still raging. Brent crude is down 3.6% this week to around $40.50 a barrel, increasing its loss this year to almost 40%.

Here’s the latest on Libya:

What else to watch:

Below is a list showing the status and capacity, in barrels a day, of Libya’s oil export terminals, according to data compiled by Bloomberg: