Libya’s eastern warlord kept the nation’s oil fields shut, in a show of defiance after world leaders failed to persuade him to sign a peace deal ending a five-year civil war.

Libya’s oil output plunged to the lowest level since August 2011, according to data compiled by Bloomberg. Its Sharara field, which can pump 300,000 barrels a day, will stop producing once its tanks are full, a person familiar with the situation said. Eastern commander Khalifa Haftar began a blockade of several ports last week.

World leaders meeting in Berlin on Sunday agreed to work toward a more durable cease-fire in the North African nation, where Russia and Turkey provide military support to opposing groups as countries outside Libya jockey for access to its energy resources. Yet, the talks showed how global powers are struggling to find solutions to a conflict that’s raged for years.

Haftar, who is backed by Russia but walked out of truce talks in Moscow last week, and Libya’s internationally recognized Prime Minister Fayez al-Sarraj will now each put forward five names for a committee to hash out the terms of a more permanent halt to fighting. The United Nations is pushing for a meeting of that group in Geneva within days.

Haftar has led a months-long assault on Tripoli, and fighting continued outside the capital over the weekend.

Global oil prices jumped on Monday as the Libyan disruptions coincided with the shutdown of some oil output in Iraq, reigniting fears about the market’s vulnerability to geopolitical risk in key supply regions.

Libya’s production began to plummet when Haftar blocked exports at ports under his control, according to a statement on Saturday from the state-run National Oil Corp. The NOC declared force majeure, which can allow Libya -- home to Africa’s largest-proven oil reserves -- to legally suspend delivery contracts.

Libya won’t be able to pump more than 72,000 barrels per day once its storage tanks are full, according to a spokesman for the NOC, down from more than 1.2 million barrels per day on Saturday. Its remaining production will come from offshore deposits and the Wafa oil field. 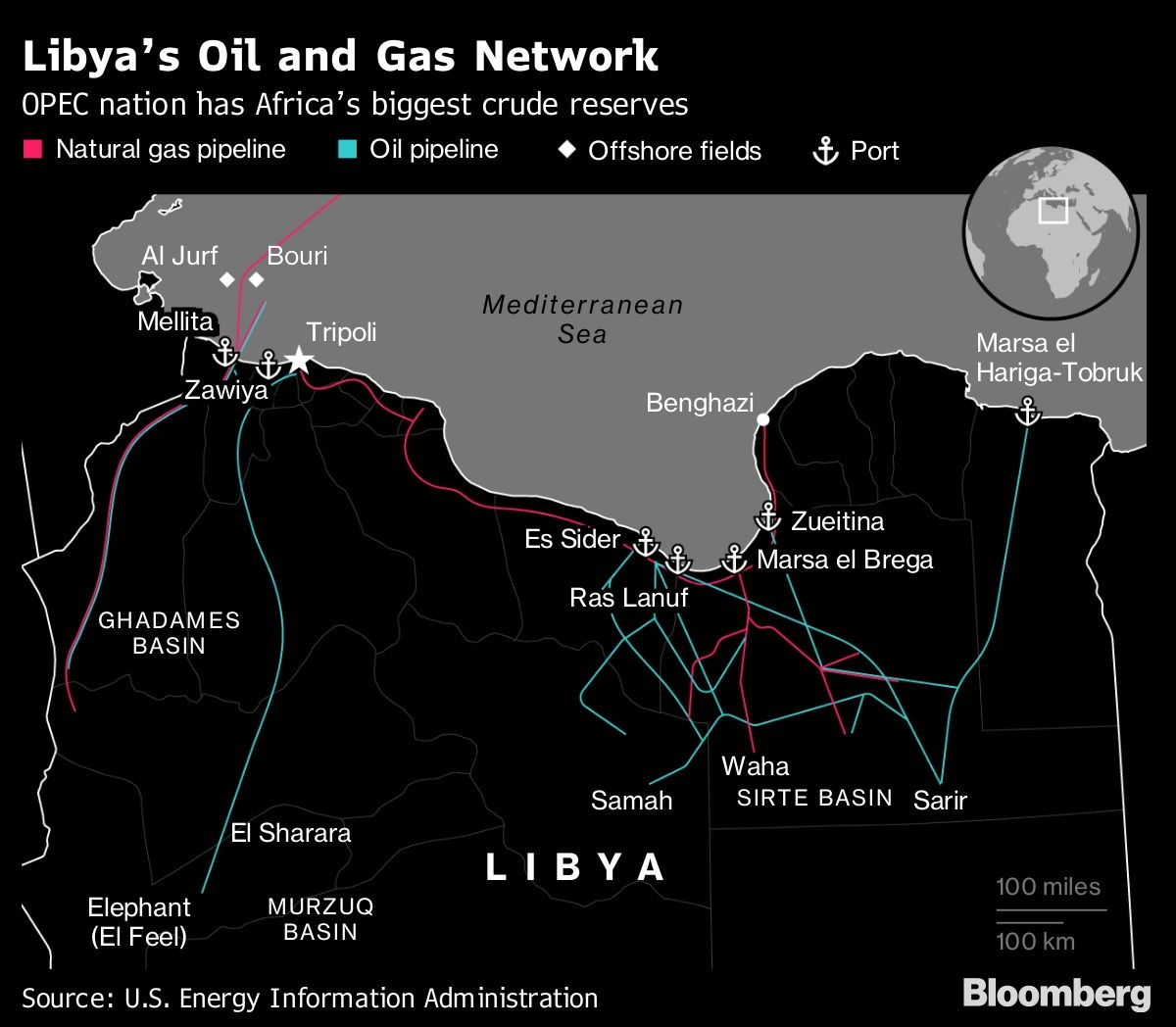 Members of the Petroleum Facilities Guard under the command of Haftar’s Libyan National Army shut down the Hamada-Zawiya oil pipeline, forcing the NOC to limit production at the Sharara and El Feel fields, according to an NOC statement. The Hamada station hosts pipelines for Mellitah Oil Co. and Akakus, the operators at El Feel and Sharara respectively, it said.

“This is a policy-related disruption,” said Edward Bell, director of commodity research at Dubai-based bank Emirates NBD PJSC. “There could be a pretty quick turnaround if there’s a political solution.”

Brent crude jumped as much as 1.8 per cent in London to $66 a barrel, but the move was muted compared with the reaction to the attacks on Saudi Arabian oil facilities on Sept. 14. Libya has less production at stake than Saudi Arabia, and its difficulties are more contained than the Saudi crisis, which threatened to escalate into a war in the Persian Gulf, Bell said.

By shutting down oil fields, Haftar is denying a key source of revenue to al-Sarraj’s government. Funds from oil production go to the country’s central bank, and Tripoli uses the money to buy weapons for its defense.

Turkey’s forceful intervention added urgency to the desire of Europeans, themselves split over how to solve the conflict, to be seen to at least be trying to do something almost a decade after airstrikes led by France and the U.K. helped rebels topple dictator Muammar Qaddafi.

France and Germany want to prevent Islamic militants and migrants from crossing into the European Union, and Haftar is considered crucial in the fight against jihadis.

--With assistance from Verity Ratcliffe