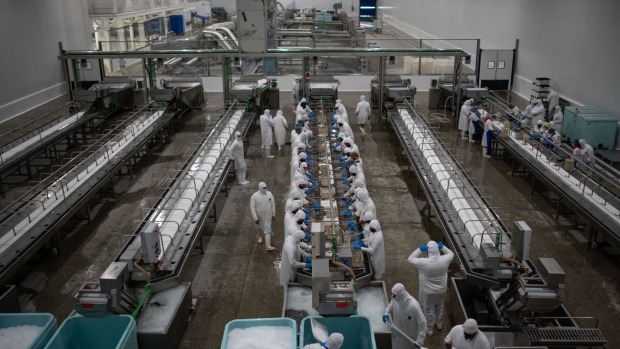 The sun sets over the artificial shrimp lakes at the Inmarlaca production farm near Maracaibo, Venezuela, on Friday, Dec. 3, 2021. On the shores of Lake Maracaibo, which helped give birth to Venezuelas oil industry nearly a century ago, thousands of tons of shrimp are being harvested from fields of man-made ponds on the shorelines, most of which winds up on the dinner tables of wealthy Europeans. Photographer: Gaby Oraa/Bloomberg , Bloomberg

(Bloomberg) -- Lake Maracaibo is, in many ways, the unlikeliest of homes for a burgeoning shrimp farm industry. After a century of relentless oil drilling, much of it carried out in a reckless and haphazard manner in the final years, its surface is stained by petroleum slicks and choked with rusted-out rigs that stretch high into the sky.

And yet, it is fitting that it is here, in the shadow of the lake that produced hundreds of billions of dollars for government coffers and once made Venezuela one of the richest nations on Earth, that a picture of the country’s post-oil economy is beginning to take shape.

Shrimp farms, big and small, are popping up all over, turning the low-lying, flood-prone lands that make up the Maracaibo basin into a latticework of massive pools that grow the dark-orange shrimp preferred by diners in many parts of Europe and Asia. Flash frozen and packed onto cargo ships, the shrimp fetch as much as $3 per pound, enough to generate some $150 million last year. This may not yet put Venezuela anywhere near the ranks of top global shrimp producers — the biggest sells 20 times as much — but it’s a lot of money in an economy that has atrophied to just a quarter of its size a decade ago. And the industry is growing rapidly, at a clip of about 30% a year.

“We can produce non-stop,’’ said Jose Rincon, the commercial director of Venezuela’s largest producer, Grupo Lamar. Like just about everyone in the industry here, Lamar officials are quick to point out that their pools are far away from the oil contamination that has scarred huge swathes of the lake. What's more, Rincon says, the region's year-round balmy weather keeps the water at just the right temperature all the time. “The climatic conditions of the lake are possibly some of the best in the world.’’

None of this would be happening if oil were still the dominant force it used to be in Venezuela. Pumping more than 3 million barrels a day — an enormous amount in a country of fewer than 30 million people — the state-run energy industry was so lucrative and powerful that it crowded out all other exports. Who needed to bother with shrimp, or any other product for that matter, when you had oil? But then, after years of mismanagement by the ruling socialist party, output collapsed. Today, production is down to less than 1 million barrels a day, and the industry is in such disrepair that there is little chance, experts say, it will manage to return to its glory days before the world moves away from fossil fuels in coming decades.

New export industries represent a key piece of the post-oil landscape in Venezuela, one where incomes are now so depressed — blue-collar workers typically make just over $100 a month — that it gives the country a competitive advantage in international markets. In addition to shrimp, exports of rum and cocoa are also growing, and companies have started sending shipments abroad of tropical fruits and, most recently, cattle.

Remittances pouring in from the new Venezuelan diaspora who fled the country are also bolstering the economy, helping fuel the first expansion in seven years in 2021. Two keys to the turnaround: President Nicolas Maduro’s decision to let the U.S. dollar replace the bolivar as the primary means of transaction in the country, which helped quell hyperinflation, and his decision to allow private enterprises like those now exporting shrimp to operate with little government interference.

“There is an opportunity for non-traditional sectors that have the capacity to compete. Labor costs in Venezuela are low, a square meter in the countryside is very cheap, and dollarization is easing transactions,” said economist Jose Manuel Puente, professor at the Center of Public Policy at IESA, a Caracas-based business school.

Shrimpers established the industry in the 1990s, but it’s only in the last four years that business has blossomed. This year, they expect growth to continue as they plunge more of their own capital and revenue from future sales into expanding production.

By far the largest producer, Lamar is responsible for roughly 80% of the shrimp exports, employing around 10,000 workers. Just west of where foreign drillers first discovered oil in Venezuela in 1914, hundreds of Lamar employees are constructing massive rectangular ponds that they expect will increase production to almost double.

“Our business was never tied to oil activity, it was always an exporting business,” said Oscar Uribarri, the company’s general plant manager. He said the economic crisis has “opened the eyes” of many entrepreneurs to discover the exporting formula. Also, dollarization has stabilized costs, allowing them to expand their investment.

To be clear, oil hasn’t totally disappeared from Maracaibo. Companies are still pumping around 160,000 barrels a day. And the region — which stretches along the Venezuelan-Colombian border — is scarred by the environmental catastrophe the industry has left behind.

It’s for that reason the shrimp industry emphasizes the steps it takes to follow strict international standards on hygiene and quality, treating waters with probiotics, re-circulating them, and constantly testing it to make sure the conditions remain optimum. No antibiotics are used.

“It’s all about quality. As long as our product continues to enter international markets, we are going to keep growing,” said Cesar Labarca, plant manager of another producer, Confremarca.

The company last year opened a new processing plant, one of the largest in Latin America, with capacity to process roughly 450,000 pounds of shrimp a day, using modern machinery.

The shrimp come fresh out of harvest in giant bins filled with ice. After they’re selected, weighed, examined, and frozen, they’re packed into 53-pound boxes marked with QR codes for traceability checks and shipped straight to the port for Europe, the U.S. and, most recently, Asia. The industry is also working to get certified for sales in Russia.

Other plants are adding value by incorporating pealing stations with hundreds of workers pulling shells and checking for flaws.

The industry has defied its circumstances. A trip to Zulia state, which encompasses Maracaibo, provides a stark reminder of the depths of the economic rut. Amid sweltering heat, residents sit in their front yards, playing board games, complaining about regular blackouts and a rising crime problem.

The proximity to Colombia has made it a hotbed for migration, with families picking up and fleeing at a moment’s notice, leaving their homes abandoned. Businesses hang “for sale” signs out front. But nobody is buying. The area is so hollowed out that an eerie silence pervades, broken only by the occasional roar of the police and trucks carrying loads of shrimp.

Amid miles of vacant and dilapidated properties, the shrimp processing facilities stand out, flanked by lots with overgrown vegetation. They’re modern, gleaming and seem bizarrely out of place, especially when the occasional donkey-drawn cart passes to pick up trash.

Confremarca’s Reynaldo Zapata acknowledges the shrimp industry is an unlikely green shoot. He says the industry has lost workers to the exodus, and that living conditions in the surrounding areas continue to deteriorate.

“We’re like a tiny oasis in the middle of it all,” he said.