We will continue to execute and drive value; the stock will follow: Lightspeed CEO

Lightspeed Commerce Inc. said Dax Dasilva is stepping down as chief executive officer after 16 years to focus on environmental and equality projects for the e-commerce company he founded.

Dasilva, 44, will become executive chair of the company’s board, with President JP Chauvet succeeding him as CEO, effective immediately. Chair Patrick Pichette, a former Google executive, will be the lead independent director.

“I’m going to be the head of the board, so I’ll still be connected to the company and involved with ESG and diversity and inclusion initiatives,” Dasilva said in an interview before his resignation was made public, referring to environmental, social and governance issues. “But I’m still interested in our products and our people. I founded the company, so I’ll be very much present at Lightspeed.”

Lightspeed, which sells point-of-sale and payment software, announced the leadership change Wednesday as it released earnings for the fiscal third quarter ended Dec 31. Revenue grew 165 per cent to US$152.7 million while the company posted a US$9.9 million loss on an adjusted basis. It lost US$7.1 million on an adjusted Ebitda basis.

For the year, the company expects to lose US$45 million on an adjusted Ebitda basis, at the top end of earlier guidance.

Lightspeed shares tumbled after the market close in New York and continued to drop after the earnings and management changes were announced, hitting US$28.50 as of 7:05 p.m., down 11 per cent from the closing price.

Its shares are down more than 70 per cent from a Sept. 22 peak on a softening earnings outlook, persistent supply chain troubles and a broad selloff in tech stocks.

E-commerce companies benefited from a boom in online sales during the pandemic. Now they face headwinds as consumers -- and the retailers they rely on -- resume some of their pre-pandemic, in-person shopping habits.

Lightspeed is also trying to recover from an attack by a short seller who claimed in a 125-page report in September that the company had inflated its numbers before going public in 2019. Dasilva called the allegations “categorically false” and defended Lightspeed’s accounting methods.

The company is still in growth mode and has been on an acquisition spree since its IPO, scooping up nine companies in three years to expand its e-commerce and payment services as it attempts to rival online retail titans Shopify Inc. and Amazon.com Inc. In October, it struck its biggest deal yet, buying California-based Ecwid Inc. for US$500 million.

“We’ll continue executing and the stock should follow,” Chauvet, the incoming CEO, said. “There’s been a short-term correction on tech but we strongly believe in our customers and market. There’s a lot of room for growth.” 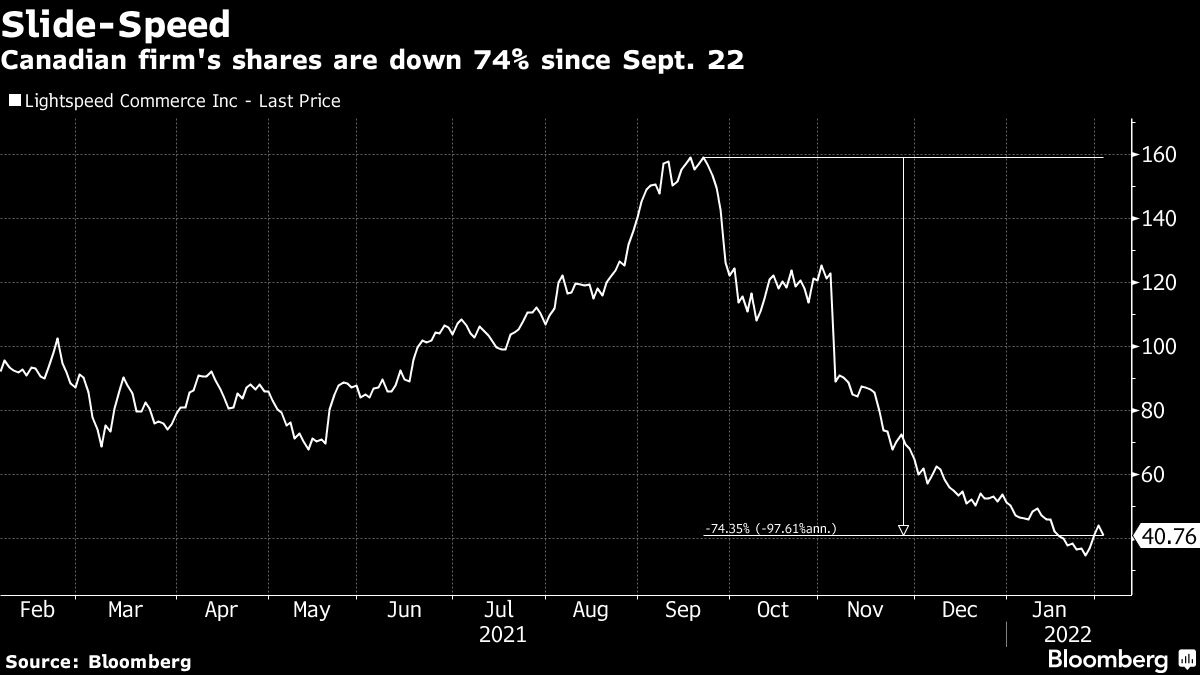 Dasilva started Lightspeed in 2005 after two years of programming and coding, skills he developed as a 13-year-old apprentice for an Apple Inc. developer. He grew the startup -- without raising venture funding for the first seven years -- into a payments and e-commerce company with 3,000 employees and 156,000 customer locations in more than 100 countries. Its market capitalization of $6 billion makes it one of the 10 largest publicly traded technology companies in Canada.

Dasilva had contemplated giving up the CEO role for years. In “Age of Union,” his book with Stéphane Poirier about “changemaking,” published shortly after Lightspeed’s IPO, he wrote that he considered leaving in 2015 to focus on his Montreal cultural center, Never Apart. In October, he started a nonprofit environmental group that takes its name from his book.

“At the 10-year mark, I had a sense of burnout,” Dasilva said. Even so, he stayed in the CEO role to continue developing the company’s team and strategy, as well as its corporate social responsibility programs, he said.

Chauvet joined the company in 2012 as chief revenue officer, becoming a board member a year later. He became president in 2016, overseeing Lightspeed’s acquisitions, its listings on the Toronto and New York exchanges, and the launch of its payments platform. Since then, Lightspeed has expanded its business to hospitality, adding logistics programs for suppliers and e-commerce platform services for merchants.

This year, Lightspeed plans to pause its acquisition spree to focus on integrating its most recent takeovers and expanding in new regions, including Australia and New Zealand, Chauvet said.

“The market is huge. There are 47 million retailers and restaurateurs,” he said. “If we put together this strategy of integrating suppliers and stores, by the time the other competitors get to the solution set that we have today, we’ll be miles ahead.”