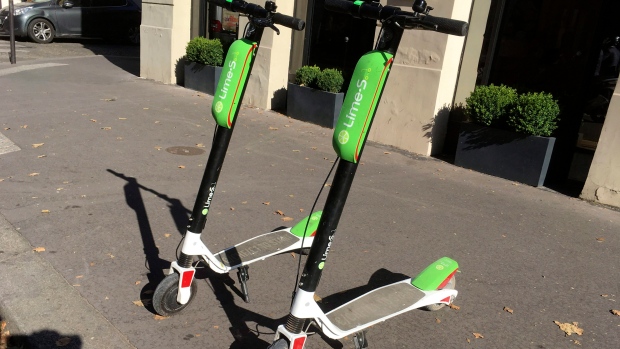 This July 3, 2018, photo shows scooters by Lime in Paris. Uber is getting into the scooter-rental business. The ride-hailing company said Monday, July 9, that it is investing in Lime, a startup based in San Mateo, California. , The Canadian Press

TORONTO -- Electric scooters are rolling into Waterloo, Ont., as Lime enters the Canadian market for the first time.

The California-based company said its e-scooters became available in the city west of Toronto on Tuesday and it hopes to expand to other markets across the country eventually.

Lime doesn't use docking stations and instead allows consumers to pick up and leave e-scooters along streets. Users unlock and locate available e-scooters through the company's app, which will charge $1 to unlock it and about 30 cents per minute to use.

Lime's e-scooters are already available in dozens of markets across the U.S. and Europe, but its manager of midwest strategic development Nico Probst said the brand is now targeting Canada because it shares many goals with Lime -- reducing congestion and carbon emissions and exploring innovative transportation.

"Coming into our neighbour up north is an exciting opportunity for us," he said.

"We feel there is a lot of initial crossover of residents here who have seen (Lime) somewhere in the U.S. and we have gotten a lot of clamouring and questions from residents here asking when it is going to be coming here."

The company's push into the Canadian market comes after months of working with regulators and the city to find a way to co-exist and tackle laws.

Waterloo is only permitting the e-scooters, which are meant to be operated in bike lines, to be used on a network of private trails and university campuses, said the city's senior economic development advisor Ryan Mounsey.

Probst acknowledged regulations weren't the only obstacle Lime encountered or will face in Canada.

Unlike the warm climate at Lime's California headquarters, Canada's winters will force the company to take its e-scooters off the streets for part of the year.

"The tires aren't equipped to deal with (Canada's) snow and ice yet, but we are looking at different iterations and seeing if we can develop the products from there," said Probst.

Lime, which offers pedal and e-bike rentals elsewhere, has also grappled with mounting concerns around dockless transportation. Some markets where Lime products or offerings from competitors Bird, Dropbike and Jump Bikes are available have faced complaints about abandoned e-scooters and bikes littering streets and sidewalks. In Asia, photos of piles of abandoned rental bikes from companies that flooded the market have gone viral.

"It is a perception of the dockless system that we knew going into this (business) and that we have been really focused on curbing," Probst said, noting that the company outfits e-scooters with GPS technology so their whereabouts can be tracked.

Lime encourages users to leave e-scooters in the "furniture zone of sidewalks," which Probst considers to be "next to the bike racks, not in the bike racks, so we are not taking up existing cycling space and the infrastructure that they rightfully need." Some cities, he said, have even created designated drop-off zones to help corral the scooters.

Lime also asks consumers to rate the parking spot the previous user left their e-scooter in to encourage users not to dump them in the way of pedestrians. The app has the ability to add incentives or fines to address parking issues, if cities demand such measures, Probst said.

Social media has seen posts in recent months featuring people destroying e-scooters, including Lime's, by throwing them off buildings, lighting them on fire, dumping them in the ocean and smashing them on concrete.

"The vandalism rate is pretty minuscule, but of course the incidents when it happens are elevated at a high level because it is a new product," Probst admitted. "We see those stories in the initial outset of the markets we go to...that novelty runs out pretty quick after a week of operating so that behaviour really tends to die off."

Those risks are part of why Lime has outfitted all of the scooters with alarms that go off if someone attempts to use the product while it is locked and a sensor that alerts the operations team if the bikes are tipped over or damaged, so they can be picked up, fixed and redeployed, if possible.

Mounsey said Waterloo was confident working with the company and introducing regulations could mitigate problems other areas have seen.

"We feel comfortable," he said. "We don't believe that we will experience some of the more significant challenges that some communities have...The pilot can be terminated along the way if things were to unfold in a non-positive way."