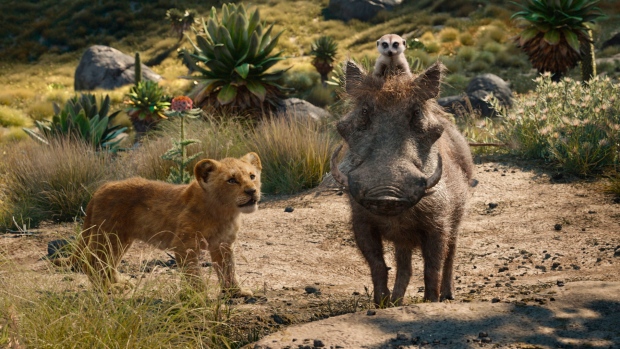 This file image released by Disney shows, from left, young Simba, voiced by JD McCrary, Timon, voiced by Billy Eichner, and Pumbaa, voiced by Seth Rogen, in a scene from "The Lion King." , The Canadian Press

The star power of Beyoncé Giselle Knowles-Carter and Donald Glover in Walt Disney Co.’s remake of “The Lion King” has overshadowed lukewarm reviews from critics. New and old fans of the classic contributed to the film’s US$191.8 million opening weekend debut, which bode well for theater stocks as box office sentiment has improved.

Revenue from movie ticket receipts is now up 9 per cent quarter to date, MKM Partners’ Eric Handler said, as a robust start for the Disney production has “put the box office back in positive territory.” Shares in AMC Entertainment Holdings Inc. rose as much as 3.2 per cent in early trading Monday.

The outlook for July and the third quarter is back on track as a strong carryover for the film is expected to “hold up well in the coming weeks,” Handler told clients in a note. Theater stocks are poised to benefit given the positive results, which “has helped ease some concerns” about box office performance looking ahead.

According to Handler, “a strong July is important for [the third quarter] as it typically accounts for 40 per cent to 45 per cent of the quarter’s revenue.” A decent opening for Quentin Tarantino’s “Once Upon A Time In Hollywood” should also help July finish in double-digit territory, he said.