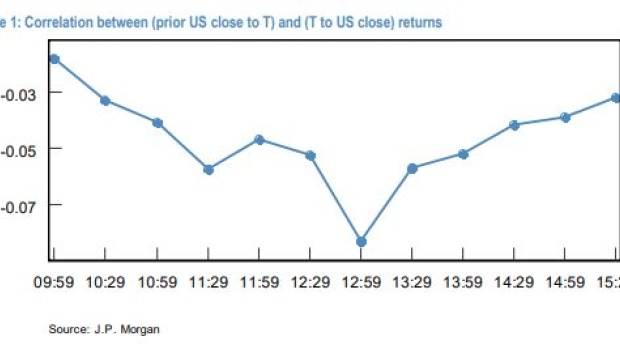 (Bloomberg) -- If you’re feeling dizzy with all the intraday turmoil in the stock market these days, you’re not imagining things.

The S&P 500 fell as much as 0.6% around noon Wednesday and then wiped out the entire decline to end the session higher. The advance came one day after the index erased a loss of at least 2% for the fourth time this year.

Such reversals, whether partial or in full, have become more pronounced in the past two years, with an inflection usually taking place around 1 p.m., according to a new study by JPMorgan Chase & Co. It’s a departure from the previous three years -- when rallies or selloffs at the open tended to endure through the close.

Blame the about-turn on thin liquidity that makes it harder for dealers to balance trading books, according to JPMorgan strategists including Marko Kolanovic and Peng Cheng.

Whatever the cause, the whiplash is an unwelcome development for investors in this exhausting year, and it’s proving especially challenging for short-term trend followers who surf the momentum of fast-moving markets.

“Market liquidity has declined significantly, making the inventory risk a much more material concern,” the strategists wrote in a note. “The reversal is more likely to happen in a down market. In our view, this is due to market makers’ loss aversion in adverse markets environments.”

According to JPMorgan, liquidity conditions around 1 p.m. over the past two years have declined a whopping 40% -- a backdrop that fosters share reversals around that time.

Volatility has been the rule of the game in the 2022 stock market as investors try to grapple with the most aggressive Federal Reserve tightening in decades and its impact on the economy. Recession warnings are getting louder, with a survey from Deutsche Bank AG last week showing 72% of respondents expected the S&P 500 to fall to 3,300 first, rather than rallying to 4,500.

Stocks rose for a third session Wednesday, extending gains after the release of the Fed’s June meeting minutes. All eyes will turn to second-quarter reporting season that’s due to kick off next week. Despite all the market turbulence, analyst estimates for 2022 earnings have largely stood firm.

“Higher recession odds lower our expectations for what S&P 500 companies will earn, what investors will pay for their stocks, and where the S&P 500 price index may stand at year-ends 2022 and 2023,” said Ed Yardeni, the president of Yardeni Research Inc., who just raised the odds of a shallow, short-lived recession in the US economy to 55% from 45%.

Kolanovic and co. found that when the difference between buyer- and seller-initiated trades on S&P 500 e-mini futures is particularly notable during the market close in Europe, the greater likelihood of a stock reversal in the middle of the trading day in New York.

That’s because dealers are seeking to curb this order imbalance in order to reduce inventory risk, pushing prices away from fundamental levels. Once more players join in the afternoon and liquidity improves, these potential mispricings get resolved -- leading to a reversal in prices.

Add dwindling liquidity more generally over the last couple years where price moves get amplified, and it’s a recipe for large, repeated turnarounds.

While poor liquidity is usually blamed for such patterns, it’s generally impossible to distinguish malfunctioning markets from volatile ones in real time. That dealers are proving slow in fulfilling orders in 2022 may be a sign of impaired market structure, but it could just as easily be a natural consequence of how quickly prices have moved this year.

“The late day reversals could be a symptom of the uncertainty investors are feeling at this potential turning point,” said Mike Bailey, director of research at wealth management firm FBB Capital Partners. “Now we are at the moment of truth and earnings are probably about to nosedive. However, investors could be looking at the next 6-12 months and trying to get ahead of a recovery in earnings and potentially sentiment.”