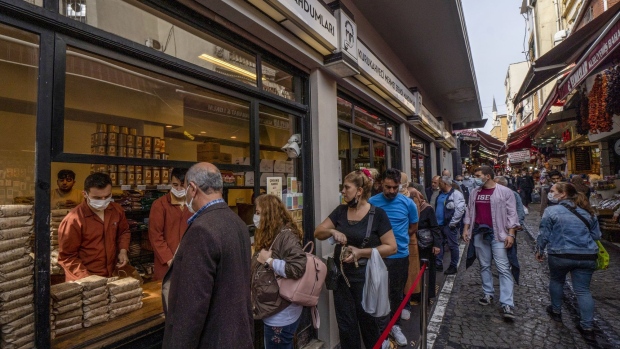 (Bloomberg) -- Turkey’s lira tumbled to a record low, weighed down by the prospect of a faster pace of tightening by the U.S. Federal Reserve.

The lira fell as much as 4.7% to 13.4541 per dollar at 8:08 p.m. in Istanbul, after Fed Chair Jerome Powell said it’s appropriate to consider finishing the central bank’s tapering of asset purchases a few months earlier than previously expected.

That’s compounding concerns over President Recep Tayyip Erdogan’s drive for lower borrowing costs, a move that has undermined the currency and fueled inflation. While most central banks are talking of tightening policy, Turkey has slashed 4 percentage points off borrowing rates since September.

The Turkish lira has weakened more than 27% since the central bank started easing policy, by far the biggest depreciation in emerging markets. Consumer prices rose an annual 19.9% in October, almost four times the official target