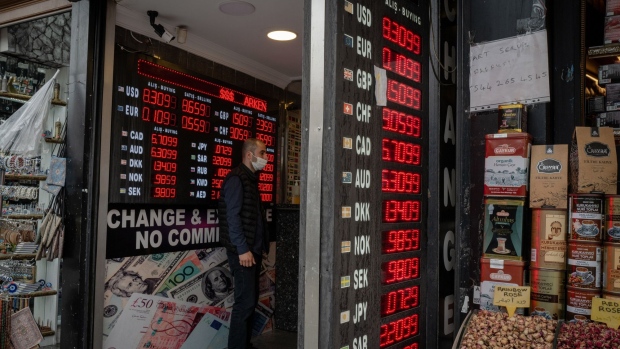 (Bloomberg) -- Turkey’s direct intervention in its currency markets on Wednesday, the first in seven years, shows policy makers are intent on drawing a line in the sand on how far they are willing to tolerate weakness in the lira.

However, how long policy makers are able to buy the currency some respite will essentially come down to the size of the war chest and how willing the central bank is to run down those assets. The Turkish central bank’s gross reserves add up to $128.5 billion, with $60.5 billion coming from the bank’s swap deals, according to latest data released on Nov. 19. When swaps and other liabilities such as required reserves are stripped, Turkey’s net reserves stand at -$35 billion. The bank has repeatedly said that its gross reserves -- the total amount at its disposal at the time -- are more important than net reserves.

The central bank’s intervention this morning is significant if only for the signaling it sends. During a previous episode of similar stress in the lira back in 2018, there was no reported intervention. In other words, the policy makers may be telling the markets that their strategy to ward off any speculation on the currency will take a different tack this time. In 2018, the central bank took the benchmark rate to 24% from 8% in a short span to arrest the decline in the lira.

Last week the lira tumbled more than 11% against the dollar in a single day, representing a 10-standard deviation shock based on its moves in the past five years. The currency has weakened after the central bank slashed its benchmark by 400 basis points since the end of August. The monetary authority meets next on Dec. 16.