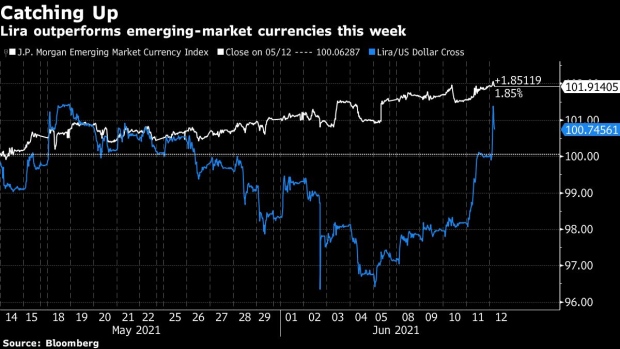 ANKARA, TURKEY - NOVEMBER 25: The S-400 air defence system from Russia is activated for testing at Turkish Air Force's Murdet Air Base on November 25, 2019 in Ankara, Turkey. Turkey purchased the anti-aircraft weapons system from Russia over the objections of the United States, which has threatened to sanction Turkey and exclude it from its F-35 fighter jet program. The U.S. fears that the F-35, which is designed to evade such anti-aircraft systems, will be compromised if Turkey deploys both. (Photo by Getty Images) , Photographer: Getty Images/Getty Images Europe

The lira rallied to its strongest level since mid-May after Turkey’s top defense official didn’t rule out progress toward resolving a clash with the U.S. over Ankara’s purchase of Russian missile defenses.

“Reasonable and logical solutions are always possible,” Defense Minister Hulusi Akar said Friday after a phone call the day before with his American counterpart, Lloyd Austin.

Akar didn’t elaborate but expectations of a breakthrough are low ahead of the first meeting between presidents Joe Biden and Recep Tayyip Erdogan in Brussels on Monday. The two men could agree on some limited trust-building cooperation.

The defense minister reiterated Turkey’s readiness to hold talks on its “partners’ technical concerns,” a proposal already dismissed by Washington.

“Market certainly building up expectations for Biden-Erdogan summit breakthrough,” Tim Ash, a strategist at BlueBay Asset Management in London, wrote in a note. “The danger is that if it does not happen, this could turn ugly quite quickly the other way.”

The lira advanced as much as 1.7% against the dollar to 8.2860, extending gains for the week to 4.4%, its best weekly performance since March, before losing some ground. The cost of insuring the nation’s debt against default declined 37 basis points to 366 this week, hitting the lowest level since March 19.

Turkey has shown no signs it’s prepared to compromise on Washington’s main demand that Ankara scrap the Russian S-400 missiles in return for the lifting of U.S. sanctions related to the purchase.

The U.S. worries that the S-400 could be used to collect intelligence on the stealth capabilities of the U.S. F-35 fighter jet that Turkey has helped to build and wants to purchase.

People who briefed on Turkish preparations for the meeting between Erdogan and Biden denied reports Turkey is planning a compromise that could place the missiles under joint Turkish-U.S. custody, possibly at Incirlik air base, saying it hadn’t been discussed with the U.S.