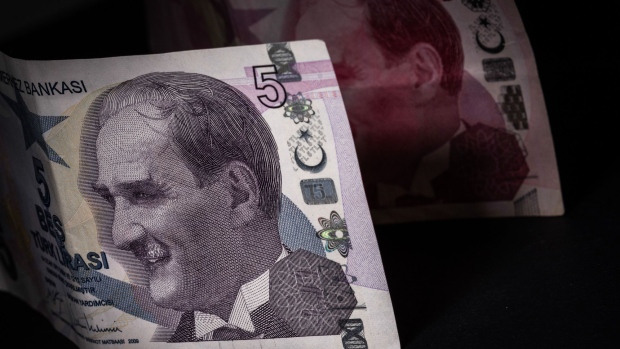 A 5 Turkish Lira banknote stands in front of a 10 Turkish Lira banknote in this arranged photograph in London, U.K., on Thursday, Dec. 13, 2018. After being overtaken by Turkey's lira in May, the South African rand’s one-week implied volatility against the dollar is now a hair’s breadth away from regaining the top spot. Photographer: Simon Dawson/Bloomberg , Bloomberg

(Bloomberg) -- Money changers in Turkey will be required to record the identities of their clients under new rules issued after the lira hit another low this week.

Previously, only clients whose transactions were worth $3,000 or more were asked to submit personal information.

“This new practice aims only to reduce informality in the industry, increase the level of institutionalization and ensure compliance with international regulations,” the Treasury & Finance Ministry said in a statement on Wednesday. “It does not involve any intervention in foreign-currency markets.”

Turks have been buying foreign currencies to protect themselves against a weakening currency and rampant inflation, which accelerated to just shy of 20% in October. Foreign exchange deposits held by locals totaled $232.7 billion as of Sept. 1, according to central bank data. That’s up 20% from the start of 2020.

The Turkish lira has been weakening since the central bank unexpectedly cut interest rates on Sept. 23. With a decline of 18% this year, it ranks as the worst performer among emerging-market currencies tracked by Bloomberg.

The new regulations were published in the official gazette on Tuesday.