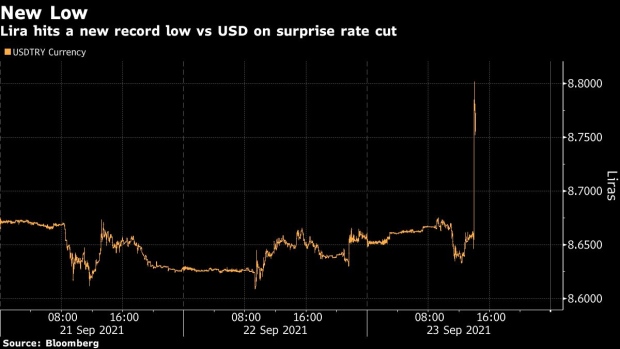 A tourist changes Turkish lira banknotes at the counter of a currency exchange bureau in Istanbul, Turkey, on Monday, March 22, 2021. Turkey's stocks, bonds and the lira tumbled as the shock dismissal of the central bank chief triggered concern the country is headed for a fresh bout of currency turbulence. Photographer: Nicole Tung/Bloomberg , Bloomberg

Turkey’s lira tumbled to a record low after the central bank unexpectedly lowered its key rate despite a deteriorating inflation outlook.

The currency weakened as much as 1.7% to 8.8017 per U.S. dollar after the central bank cut the one-week repo rate by 100 basis points to 18%. All but one out of 23 economists surveyed by Bloomberg expected the bank to stand pat on Thursday.

The decision is a sign that policy makers are yielding to President Recep Tayyip Erdogan’s demands for lower borrowing costs. The move also threatens to further undermine investors confidence in the nation’s assets as the real yield on the lira is eroded.

“Any time this year would have been too early,” said TD Securities’ Cristian Maggio. “They just seem to have gone ahead with was in the plans since the governor change.”

Turkey’s benchmark rate now stands 125 basis points below headline inflation, which accelerated for a third month to 19.25% in August. That’s almost four times the official target for the year.

The currency has weakened more than 15% against the dollar this year, and is poised for its ninth consecutive annual depreciation.