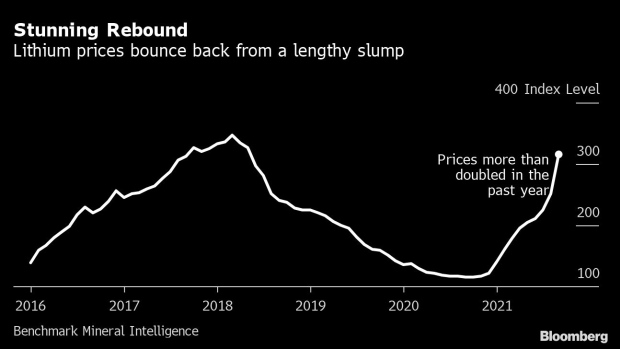 Prices have more than doubled in the past year, according to a Benchmark Mineral Intelligence index of lithium carbonate and hydroxide. Demand for the materials used in electric cars and renewable-energy storage has soared and, while miners are seeking to boost supply, there’s not enough to meet consumption.

“The financing for lithium projects is still too little, too late,” said Cameron Perks, a Melbourne-based analyst at BMI. “The market deficit is already occurring.”

A lengthy slump since 2018’s peak meant investment in the sector slowed, while the pandemic has exacerbated supply constraints. On the demand side, the green energy transition has accelerated the adoption of electric vehicles and global lithium consumption is estimated to grow fivefold by end of this decade, according to BloombergNEF.

Read more: Vast Fortunes Will Be Made in Obscure Metals Behind Clean Power

“As prices increase now, there will be unknown yet-to-be-announced projects and expansions that will help to increase supply to meet demand. That is almost a certainty. What is not certain is just how many unknown projects there are out there,” Perks added. “There’s also a possibility that not enough lithium can be mined, then it could risk a slower EV roll-out.”

Prices are climbing across the supply chain. Pilbara Minerals Ltd.’s second auction of spodumene concentrate -- a partly-processed form of the material -- attracted a top bid of $2,240 a ton for a cargo of 8,000 tons, up from $1,250 in its inaugural tender in July. China lithium carbonate has almost doubled in just two months, and lithium hydroxide is up more than 70% in the period, according to Asian Metal Inc. data.

That’s pressuring battery makers, who are also facing higher prices for other key inputs like cobalt and copper.

After a decade of year-on-year battery price declines -- an important measure in gauging when EVs will cost the same or less than gas vehicles -- there’s now a chance that trend will stall as raw material costs climb, according to BNEF analyst James Frith. About 40% of the cost of a battery is tied to commodities that have rallied.

Still, manufacturers may be able to offset some of the higher costs through improving production process, reducing scrap rates and switching to cheaper battery chemistries, Frith wrote in September.