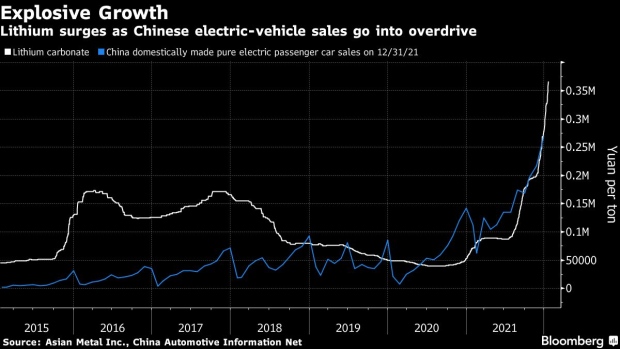 An electric car stencil symbol sits on a parking space at the electric vehicle charging site operated by Enercity AG in Hanover, Germany, on Thursday, July 23, 2020. Europe’s largest car market is rolling out a nationwide electric car charging infrastructure by 2030 in an effort to rein in transport emissions. Photographer: Alex Kraus/Bloomberg , Bloomberg

(Bloomberg) -- Lithium’s vital role in electric-vehicle batteries means automakers, miners and investors are racing to figure out how much supply the world will need in the coming years -- and also how much it’s going to get.

The problem is the predictions vary wildly.

The metal’s price has surged fivefold in the past year, reflecting mounting worries about availability. For years, batteries and EVs have become cheaper to make as the technology improved and production stepped up. But now there’s a risk that rising costs of raw materials -- and lithium in particular -- could hobble the transition just as momentum picks up.

The stakes are high for carmakers that are spending billions of dollars betting on a battery-powered future. Mining companies and governments are responding with ambitious plans to boost production. But demand is growing at such a breathtaking pace that it’s not clear whether it will be enough.

In a survey of six leading lithium forecasters, estimates for how the market will look in 2025 range from a deficit equal to 13% of demand to a 17% surplus. Projections for the market’s size diverge sharply too, with demand forecasts ranging from as little as 502,000 tons to as much as 1.25 million tons.

The gulf between forecasts reflects lithium’s status as a small market on the cusp of seismic expansion, with the average of the six estimates suggesting annual growth of more than 20% for both supply and demand between 2021 and 2025. That compares with typical growth rates of 2%-4% in larger and mature markets like copper, where surpluses and deficits usually equal a fraction of demand.

The forecasts matter because banks use them for everything from gauging future car sales to valuing loans in mining projects. Vague market projections leave more room for sharp price swings when supply panic kicks in.

That could be particularly unnerving for the the car sector, which has placed lithium at the center of its electrification plans.

It has spent years experimenting with different chemical compounds to minimize use of other battery metals like cobalt -- which is sometimes mined in unethical conditions -- while boosting usage of abundant elements like iron. With lithium at the core of virtually every battery technology in commercial use and development, higher prices could quickly start to bite.

For example, if lithium spot prices remain at levels currently seen in China, that could add up to $1,000 to the cost of a new EV, according to Benchmark Mineral Intelligence.

Benchmark is among those forecasting supply to fall short of demand, even as it predicts output to roughly double from 2021 levels by 2025. Top lithium miners including Chile’s SQM reported annual demand growth of close to 50% last year.

“There’s a complete overoptimism about the responsiveness of supply in the lithium market,” said Andrew Miller, chief operating officer at Benchmark Mineral Intelligence. “It’s very hard to see how it’s going to accelerate at the speed that the battery market and electric vehicles are accelerating.”

So far, the auto industry has been relatively relaxed about lithium supplies, mainly because they occur in high concentrations in mining-friendly countries including Chile, Australia and Canada.

If anything, worries that large spikes in supply could quickly swamp the market is partly why some of the biggest miners have shunned developing lithium assets. Rio Tinto Group is the only mega-cap miner who’s so far been tempted to move into the metal -- a market that’s still tiny compared with commodities like iron ore and copper.

History shows that even current heavyweight lithium miners like Ganfeng Lithium Co., Albemarle Corp., SQM and Livent Corp. should be cautious. A spike in prices a few years ago quickly unraveled as producers flooded the market. Some analysts warn it could happen again.

“We have some pretty open-ended supply opportunities opening up,” said Tom Price, an analyst at Liberum who started covering commodities in the early 1990s. “There are really no constraints on resource upgrades and additions for new supply.”

On the other hand, there are also good reasons why supply could lag.

The mining industry has a reputation for failing to deliver on targets, and McKinsey & Co. estimates that more than 80% of projects come in late and over budget. Many assets being studied are owned by junior miners who don’t have as much experience or existing revenue streams to fall back on as the majors.

Even the biggest miners face obstacles to bringing on new supply because of environmental concerns, despite lithium being a key material for a greener world. Serbia last month put a stop to Rio Tinto’s plans for a $2.4 billion mine after a nationwide backlash over the potential environmental risks.

In Chile, home to the world’s largest lithium reserves, the mining industry is also running into stiff political headwinds.

But as compelling as the supply risks are, it’s the potential for huge demand growth that’s really behind the difference in opinions on whether lithium will be over or undersupplied.

While Bank of America Corp. is among the most optimistic on supply, it’s forecasting deep deficits once consumption is factored in.

“There’s an awful lot of tons that producers need to bring into the market,” said Michael Widmer, head of metals research at the bank in London. “We have a disconnect where on the demand side we’re pushing very hard, but on the supply side, miners are only just starting to commit.”