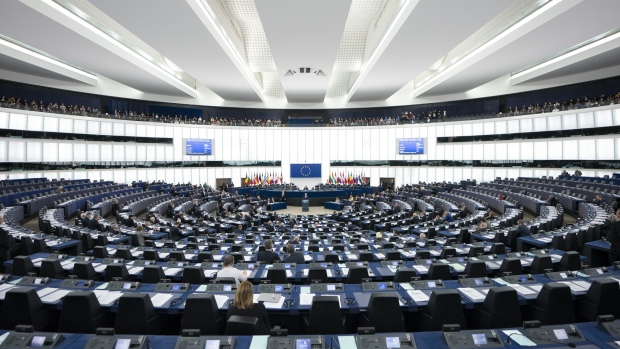 Krisjanis Karins, Latvia's prime minister, speaks from the podium during a "Future of Europe" plenary session debate at the European Parliament in Strasbourg, France, on Wednesday, April 17, 2019. Next month's European Parliament Elections, a twice-a-decade vote, is one of the biggest democratic exercises on Earth. , Bloomberg

(Bloomberg) -- Lithuania’s ruling party is leading in popular support by a razor-thin margin ahead of this month’s European Parliament elections and a presidential runoff, a poll showed.

The Farmers and Greens Union had backing of 21.1% of voters, just ahead of the opposition Homeland Union, which had 20.5%, the Baltijos Tyrimai survey for ELTA newswire said on Thursday. The opposition Social Democrats were third with 11.4%. The margin of error was 4%.

The poll was conducted before the ruling party’s leadership made a dramatic threat to cede power after Prime Minister Saulius Skvernelis was eliminated in the first round of a presidential election Sunday. On Wednesday, Farmers and Greens lawmakers rallied behind Skvernelis, suggesting he reconsider his pledge to resign. In another unexpected u-turn, they also voted to preserve the current government coalition, despite earlier calls to dissolve it.

To contact the reporter on this story: Milda Seputyte in Vilnius at mseputyte@bloomberg.net

To contact the editors responsible for this story: Andrea Dudik at adudik@bloomberg.net, Michael Winfrey, Piotr Bujnicki